Ten years ago, Sister Helen Weber and Sister Maryann Bremke were restless in retirement. As they tried to find ways to make a difference where they lived in northwest Dayton, they became aware that there was a critical need for literacy in the area.

In responding to that need, they had at the forefront of their minds the mission of the Sisters of the Precious Blood to “proclaim God’s love by being a life-giving, reconciling presence in our fractured world.”

“Responding to the needs of the people, our own call to mission, and the recognition of the mission right here in northwest Dayton — it all came together,” Sister Helen said. “We recognized the problem, and we recognized our own capabilities. We were both lifelong educators, and we were available.”

Sisters Helen and Maryann put their call to mission into action and, with the Congregation and local community mobilized with them, the Brunner Literacy Center opened its doors in 2011. Since then, over 1,700 people have come to the center, seeking assistance in Adult Basic Education, preparing for the GED, learning English, or pursuing continuing education.

In 2019, 357 active students — between the ages of 19 and 82, and from 32 different countries — logged over 11,600 hours of instruction. Over 100 students have earned their GED. Some students have attained U.S. citizenship. Countless others have achieved personal and professional goals. All services are provided at no cost to students.

Throughout the process of establishing the center, “the movement of the Spirit has been very evident and active,” Sister Helen said.

“Every time we came to an impasse, something just opened up,” Sister Maryann added.

They knew they needed four things to get going; the first was funding. The Congregation provided a startup grant. Precious Blood Sister Ruth Ann Meyer had experience as a math professor and grant writer at Western Michigan University; she wrote a number of grants for the center that provided funding in the early years.

Next, they needed a place. Shortly after coming up with the idea, the space — which is located just across the street from Salem Heights, the Congregation’s central house in Dayton — was donated to Precious Blood Parish, which allowed Sisters Helen and Maryann to use it for the center.

At the same time, the Miami Valley Literacy Council, which had operated in downtown Dayton since the 1960s, closed its doors. Brunner Literacy Center obtained many of the organization’s items — tables, chairs, bookshelves, even the whiteboard and the clock on the wall — and put them to use.

Next, they set out to find tutors. Sisters Helen and Maryann held a meeting within the Congregation to see who might be interested; about 30 Sisters came to the meeting and committed to serving as volunteer tutors. Many of them were also retired educators.

“I think we tapped the experiences of our Congregation very well,” Sister Helen said. “Some Sisters had taught primary grades. Their experience was invaluable when somebody came in here who couldn’t read at all. They brought in those teaching skills. The support of the Congregation, in terms of people and their skills and encouragement, were critical in our development.”

“The Sisters supported our reaching out to the people in this way,” Sister Maryann said. “Because they felt that they knew what education does for a person. It’s the gift that they need to have a quality life.”

“Sister Rosalie Kastner was in her 90s, and she was still over here tutoring, because she had been a primary grade teacher,” Sister Helen added. “A whole bunch of them did that. Some of them came over here with walkers. It was very much a community endeavor.”

“It sparked our energy to say, ‘We can do something here.’ And we knew a lot of Sisters were with us,” Sister Maryann said.

Very quickly, members of the community followed suit. Sisters Helen and Maryann advertised in the bulletin at Precious Blood Parish and, Sister Helen said, “people came from all over when they realized that they had something to give. We felt that same thing: Somebody has a need; we have something to give.”

One member of the community stepped up as a volunteer tutor and ended up working full time at the center for a decade. Barb Maloney had taught for many years at St. Rita and Precious Blood schools. She started out coming over to the center for the afternoon after school let out. When she retired, she started working for the center full time, serving as program director and eventually establishing the center’s location at the Day Reporting Center (DRC), part of an incarceration center focused on drug treatment. Now retired from the center, she still serves as a tutor at the DRC.

“She was an excellent teacher and brought that excellence here,” Sister Helen said. “She could relate to people really well; she was an enormous contribution to this place.”

With funding, a space and tutors secured, the center was ready to open to the local community. The 2010 census had indicated that 4,000 people in northwest Dayton over the age of 18 had not finished high school. So Sisters Helen and Maryann knew students were “out there” — they just had to find them.

They distributed flyers advertising the center, but they didn’t seem to be very effective. “Then we realized people couldn’t read the flyers,” Sister Helen said.

“We had to be creative in the way we advertised it because we were appealing to an illiterate population,” Sister Maryann said. Word of mouth proved to be the most successful way of getting the word out. Sometimes someone would stop in, thinking the center was a furniture store. When they found out it was a literacy center, “They would say, ‘I know someone who can’t read. I’ll let them know.’” Over time, the number of students increased.

“It grew. It blossomed into something,” Sister Maryann said.

Originally from Ottoville, Ohio, Sister Helen entered the Community in 1952 and served as a classroom teacher for several years before entering into educational administration. Sister Maryann, originally from Celina, Ohio, entered the Community in 1954 and also ministered as an educational administrator, including 23 years as an elementary principal and 20 years as assistant principal at Carroll High School. She also served as president of the Sisters of the Precious Blood for eight years. She continues to tutor at the Salem Avenue location and the Day Reporting Center.

Their backgrounds complemented each other, with Sister Helen working on the legal aspects of establishing a nonprofit organization and Sister Maryann developing the curriculum.

They named the center for the Congregation’s foundress, Mother Brunner, who was noted for baking bread and giving it to the poor. In following her example, “the food that we are giving to the poor is the bread of literacy,” Sister Maryann said.

From the beginning, Sisters Helen and Maryann started with the idea that they wanted to help adults learn — but in a setting that didn’t look like a school. “A lot of people have had a bad experience with school,” Sister Maryann said. “We wanted to make it inviting.”

So, although the center is situated in a former appliance store in a small shopping center on Salem Avenue, it does feel warm and welcoming. There are comfortable chairs, plants, quiet corners and, most important, several small tables to facilitate the one-on-one tutoring that makes the center unique. “In a one-on-one setting, you create a relationship as well as teaching, and that becomes a very important part of it,” Sister Helen said.

“When somebody walks in the door, the first thing we do is ask them what their goals are. And then we respond to that goal,” she said. “Their needs become the driving force. The needs of the people in this area became the driving force of the foundation of this literacy center. It’s still the same motivation.”

One student, Steve Dye, works for a cleaning and maintenance company in Dayton but would like to start his own janitorial business with his son. For over three years, he has visited the center twice a week to work on reading and studying for the GED.

“I felt comfortable when I first walked in the door. I enjoy the teachers; I enjoy the people around me,” he said. He likes reading the Bible, which he and tutor Pat Henne do together at the start of every session. They started at the beginning and so far, they have read over 150 pages — up to the Book of Numbers.

Henne has been volunteering as a tutor for about five years; she said she previously volunteered as a tutor at Precious Blood School and learned about the center there. “All my students have been delightful,” she said. “Sometimes it surprises me, their reasons for coming. One was a young woman from Kenya who spoke no English at all. One man was 80 years old and said he just wanted to learn to read before he died. Another man could read but wanted to read better, and he was really happy with the progress that he made.”

Today, the center is well-situated to continue serving the local community, with its students and about 150 active volunteers supported by a handful of administrative volunteers and eight staff members.

Executive Director Ashley Lackovich came on board in July 2019; previously, she worked overseas with a variety of international development and education agencies. She considered this area a home base and was interested in returning “for the right opportunity.”

“I was interested in a position where I can bring something to the table while also continuing to learn, and serving humanity. This fits perfectly,” she said. In her new role, she hopes to enhance current programs as well as expand where there is a need, as funding allows.

An 18-member board of directors, led by Sister Carol Bauer, S.C., guides the center toward the future, while always keeping it rooted in its mission. Sister Carol has served as president of the board since May 2017 and brings experience from a diverse professional background, working in education, parish administration and ministry, and hospital administration.

“One of the most significant things I learned from all of the people I ministered with in each of these diverse settings is how essential literacy is to success. There is no greater gift to offer another than an educational foundation,” Sister Carol said.

“The staff have committed themselves to the continuance of our mission,” Sister Helen said. “They have picked up the mission and integrated it into what they are doing. It’s very evident when you talk to them. And the board is behind it.”

“The mission was always front and center for who we were and what we were trying to do,” Sister Maryann said. “That’s what’s so great about this team we’ve got now. They’re tuned into that. That group of people is invested in the mission. Living the mission into the future is part of the legacy of the Sisters of the Precious Blood, and we’re equipped to move into the future with the staff and the board of directors that we have.” 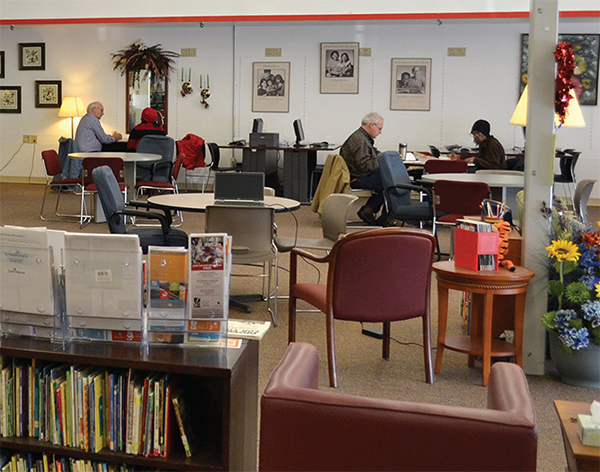 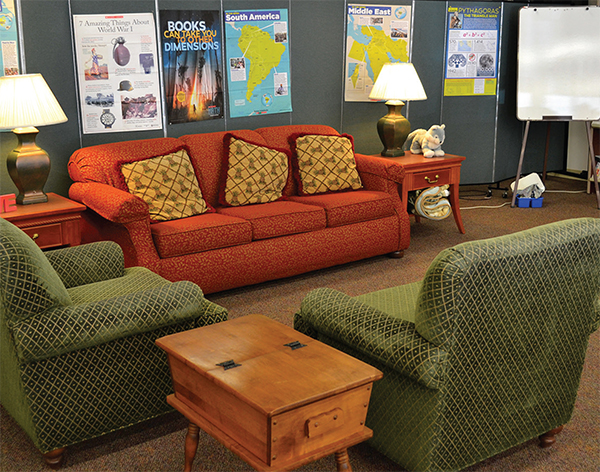 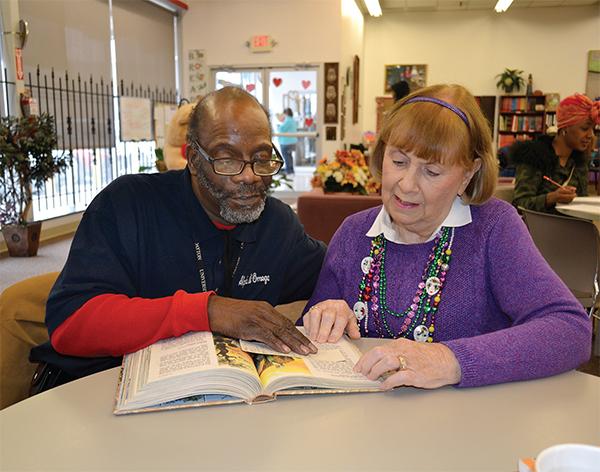 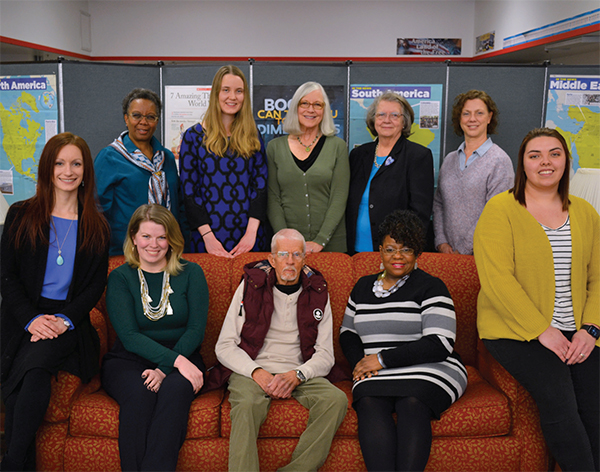