Sisters at Salem Heights spent some time this summer labeling bars of soap with the national human trafficking hotline. The soaps are distributed to area motels, where trafficked and other vulnerable individuals may see the phone number and be able to seek help.

July is Women’s Motorcycle Month! The Sisters at Salem Heights learned about motorcycles from Sarah Dixon, who works in maintenance at Salem Heights and has also been racing flat track motorcycles for over 20 years. Sarah explained that although racing can be dangerous and expensive, “it has taught me that hard work gives results and taught me discipline, good values and — the most important to me — perseverance!”

Earlier this year, several people mentioned that our administrative offices had no identification and were hard to find, so Salem Heights Maintenance Director Chuck Carmack got to work! He custom built the framework and installed new signage produced by Northmont Signs.

Another new sign reflects a name change. Since the cemetery at Salem Heights recently underwent landscape renovations, it is now even more of a welcoming place to walk or rest, and is now known as the Maria Anna Brunner Memorial Garden.

Chuck also masterfully crafted a bench for the Memorial Garden. When the Memorial Day tornadoes wreaked havoc in our area last year, Chuck used one of the felled trees at Salem Heights to create an object that is both beautiful and useful. It will be enjoyed by Sisters and visitors for many years to come!

Another new bench at the Memorial Garden was created by young men in the carpentry program at the Precious Blood Ministry of Reconciliation in Chicago, where Precious Blood Sisters serve as both staff members and volunteers. The bench displays a quote by Mother Brunner: “I hope to contribute to this good work even in eternity.”

Left, Chuck with one of the new signs; Sister Judy Kroeger photo. Middle, the bench made by Chuck; Nick Dole photo. Right, the bench made at PBMR; Michelle Bodine photo. 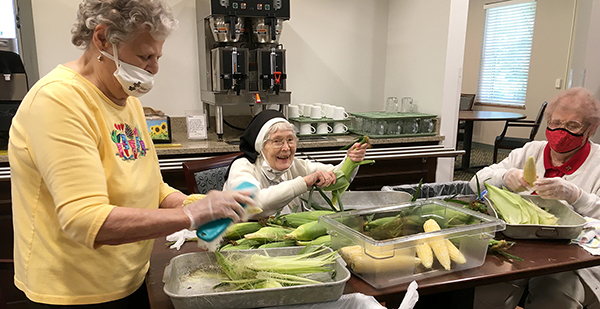