CPPS infused with new energy — of the solar variety

Using the Lord’s gift of sunlight, the Sisters of the Precious Blood’s Salem Heights retirement center in Dayton, Ohio, has powered up for a new era of sustainability. Melink Solar and Geo completed the installation of a 1,700-panel, ground mount solar array on the Congregation’s property. The array will supply approximately 60% of the energy needs of the four-story building, which houses 45 Sisters.

The Congregation had learned that adding solar panels to Salem Heights itself was not feasible due to its age and other factors, but Melink proposed installing the array in open fields adjacent to the building instead. The city of Trotwood approved the 670-kilowatt project last fall. “The reason for doing this is to reduce our carbon footprint,” Sister Patty said. “And hopefully we encourage others to do the same.”

This project and other smaller solar and geothermal energy installations on buildings that the Congregation owns are the result of its commitment to respond to the climate crisis and to heed Pope Francis’ call to action in Laudato Si.

Additionally, the land around the solar array will be seeded with native prairie plants this winter. As the plants develop, they will increase biodiversity, water infiltration and carbon sequestration, and provide habitat for endangered pollinators.

This 4-acre parcel of land, which formerly took three hours to mow each week, has been transformed to harness the sun for heating and cooling energy and in the near future, to produce a flourishing natural habitat! 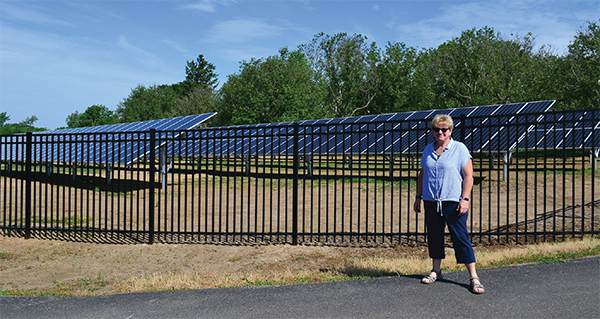