On Aug. 2, the Congregation celebrated the rite of initiation into religious life of Mi-Kyoung Teresa Hwang.

Originally from South Korea, novice Sister Mi-Kyoung came to the U.S. in 2013 to earn a Doctor of Ministry in Spirituality degree at Catholic Theological Union in Chicago. Prior to entering the program at CTU, she worked in Seoul as executive director of Korean Catholic Women’s Community for the New World.

“When I attended the class at CTU by Robert Schreiter, CPPS, on the ministry and spirituality of reconciliation, I felt that I was in the right place,” Mi-Kyoung said. “I wrote my final paper on a spirituality of reconciliation in a Korean context. Toward the end of my study, while in a spiritual direction internship program at the Claret Center in Chicago, I felt the call from God.”

“That was the beginning of my discernment journey with CPPS. And now I am a novice of the Sisters of the Precious Blood in Dayton. Two years ago, I never knew that I would be here today. The merciful God surprises me,” she said.

As presider at the rite, Sister Joyce Langhals asked Mi-Kyoung what becoming a novice will mean for her. Mi-Kyoung responded:

Sister Joyce Lehman — who was President of the Congregation at the time — delivered a reflection, saying: “The time of novitiate is a sacred time — a time of opening mind, heart and spirit to the movement of the Holy Spirit. A time of deepening our personal relationship with Jesus, and a time of fostering gratitude to our merciful Creator for all the gifts we have been given that can be put at service to God’s people.”

Sister Joyce added that the coming canonical year can be seen as a gift, “a time away from worrying about school or work or connections. It can be like a yearlong retreat that calls out to Mi-Kyoung to balance prayer, community and ministry in a way that she will not have time for again. It is a time to immerse herself in our charism, our mission, and our history and heritage.”

During the entrance rite, Sisters Rosemary Goubeaux and Genny Volk gave testimonies to Mi-Kyoung’s readiness to enter the novitiate, saying they witnessed in her a desire to follow her call from God to become a Sister of the Precious Blood. Both recommended her without reservation.

Reflecting on the rite, Mi-Kyoung said she looks forward to continuing to discern her call and grow within the community, saying, “I am so happy to be accepted by our Sisters as ‘one of them.’” 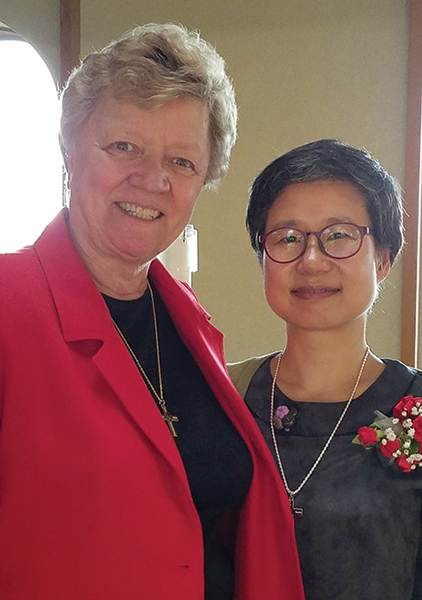