The impact of Grassroots

Initial interest in things environmental and justice- and peace-oriented began to coalesce in our Congregation early in 2012. Our organized endeavors started small. A brainstorming group met Dec. 5, 2011, to link Sisters interested in a particular area of concern. While eight areas were initially identified and established with a coordinator for each, only six became active; of these, only three really materialized. This early effort began with a simple quarterly Ecology Bulletin and took various routes to connect Sisters and also former members who were interested in focusing on the environment as an important issue for themselves and any others desiring to share ideas and experiences with other members of the Congregation.

Another major step occurred as a result of the 2015 Assembly. Preliminary conversations occurred around peace, justice and care of the environment in relation to part of our 2015 Assembly. Emergent Future Directives yielded key directions, which are still the basis of our sharing.

. . . giving individuals an opportunity to be heard, to question, to raise concerns.

. . . helping to motivate ourselves to action and to share information and ideas with each other.

Over the years, various short articles shared photos of “green” efforts, as well as comments about various resources, practices and wide-ranging questions and concerns, some of which include:

Considerable interest and involvement has developed, with many Sisters contributing over the months. This vehicle is a way to unite our efforts in peace, justice and ecology while staying focused on the Directives we have set for ourselves:

As of November 2017, we have taken the next step of jointly working with the Missionaries of the Precious Blood in these endeavors, coordinated by Colleen Kammer. 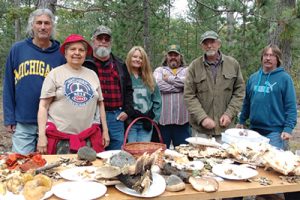 Sister Marie Kopin works with conservation district officers and their board in Michigan, Oct. 2017; contributed photo.