A buzz of activity created by people across the generations filled the cafeteria of Chaminade Julienne High School (CJ) on Saturday, March 10. The purpose of their concerted effort was to educate and to provide direction for area hotel staff on the topic of human trafficking. This was done prior to the increase in out-of-town visitors to Dayton for the NCAA First Four basketball tournament on March 13 and 14.

Over 60 people participated in the event, which was co-sponsored by Abolition Ohio, CJ, the Sisters of the Precious Blood, the University of Dayton (UD) and S.O.A.P. (Save our Adolescents from Prostitution). Representing the CPPS were myself and Sisters Regina Albers, Marita Beumer, Ann Clark, Joan (M. Christine) DeChristopher, Patty Kremer and Ceil (Ellen Mary) Taphorn.

To prepare for the afternoon hotel visits, the Sisters assembled packets from S.O.A.P. that contained missing children posters, letters for management, a list of “red flag” trafficking indicators and mousepads and key chains containing the national anti-trafficking hotline number. CJ and UD students labeled bars of soap with the hotline number, which were delivered to the hotels along with the packets.

Theresa Flores, a former sex trafficking victim and founder of S.O.A.P., gave a presentation to the group about the human trafficking industry and shared her personal story of being trafficked at age 15. Out of her own suffering grew her mission to save victims of sex trafficking. Her organization does this through the education of staff at hotels and other 24-hour businesses where trafficking is likely to occur. It also places the hotline number within reach of trafficking victims, via bars of soap in bathrooms.

Human trafficking is one of the leading crimes in the United States and the world. It affects not only girls; about 20 percent of trafficking victims are boys or young men. Flores explained that the activity is often mislabeled as prostitution whereby people believe that the trafficked individuals have a choice in the activity. In fact, many are drugged and subsequently addicted, beaten, blackmailed and/or they or their family members are threatened with violence; these things keep them in the industry.

S.O.A.P. accomplishes outreach to hotels ahead of large events throughout the country such as the Super Bowl, NASCAR and the Indy 500. With the NCAA Tournament about to come to UD Arena, outreach volunteers departed from CJ in teams of two to four people and visited 80 hotels over a 25-mile radius of the Arena.

Two UD students came back from their hotel visits very energized by the experience. They decided to take on the role as co-coordinators of the Dayton S.O.A.P. chapter, whereby they will train volunteers for outreach and organize S.O.A.P. activities to keep the pressure on the traffickers and to provide an avenue to freedom for the enslaved young people in the Dayton area. 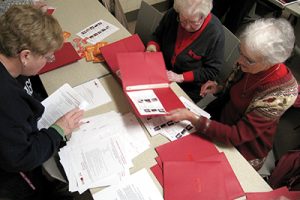