The pilgrimage began May 4, 2017, with the announcement that Venerable Father Solanus Casey, O.F.M.Cap., was to be beatified in Detroit, Michigan, later in the year.

On that day, I remembered living as a child about 11 blocks from St. Bonaventure Monastery, where Father Solanus had been a porter for many years, and going there for Mass with my mother and older brother. I recalled being at the monastery on January 9, 2017, for the funeral Mass of my Aunt Mary, who was a lay Third Order Franciscan. I remembered my uncle praying with a second-class relic of Father Solanus Casey when my father was dying. Later I found a second-class relic of this saintly man among my parents’ belongings. I also remembered stories of the soup kitchen which Father Solanus co-founded in Detroit in 1929 during the Great Depression and how a cousin periodically volunteers at the soup kitchen that continues to this day.

Having left Michigan shortly after the death of Father Solanus, I did not have the opportunity to know much about him. When the announcement of the beatification was made, I began to read and study about, as well as pray to, this saintly priest. Then I was invited to be a volunteer at the beatification. I decided to do so without hesitation, not only for the experience but also to give back to the Archdiocese of Detroit and the city of my birth.

I read and listened to “Solanus stories” and talked with several members of the CPPS community who had been to the Solanus Casey Center at St. Bonaventure Monastery. The readings were from books such as The Porter of Saint Bonaventure’s by James Patrick Derum; Meet Solanus Casey by Brother Leo Wollenweber, O.F.M.Cap.; and Thank God Ahead of Time by Michael Crosby, O.F.M.Cap., as well as other readings from various Catholic and local newspapers. My readings led me to a deeper appreciation for the gentle, humble priest who walked the streets of Detroit and of Brighton, where I now reside. He had been the summer chaplain for a group of orphans who came to a Brighton camp. I gained an appreciation of a holy man who accepted individuals where they were in their life and who gently challenged each to grow as a person and in their faith. This challenged me to be more aware of individuals who I meet in my professional life.

In my readings, I discovered that several women came to see Father Solanus. They were coming from a Catholic sanitarium in Rome City, Indiana. The assumption is that this was Kneipp Springs and the women had also been influenced by our CPPS Sisters.

I heard Solanus stories from individuals in the Brighton area, stories about healing — both spiritual and physical — that were attributed to Father Solanus in his lifetime and after his death. I met a group of women who were orphans who knew the chaplain Father Solanus in his lifetime. I discovered a shrine to Venerable Solanus Casey at St. Mary Magdalen Church, a local Brighton parish.

As the weeks from May 4 continued, many people from various areas across the United States, Ireland, Canada, Italy, Panama and other countries prepared for the journey to Detroit for the beatification of the Venerable Solanus Casey. Three hundred-plus relatives of this holy friar made the journey, and 66,000 people — young children to individuals all across the life span — assembled on Saturday, November 18, at Ford Field, where the home stadium of the Detroit Lions was transformed into a sacred space for the beatification Mass.

Along with close to a thousand volunteers, we assembled together the Mass program and the booklet for the beatification. Prior to Mass, I met people I knew from my home archdiocese — like my youngest sister’s friend, who also was a volunteer. I met a young child, Edward Solanus, who journeyed with his parents from Indianapolis to attend the liturgy. His mother’s great-grandmother was healed by Father Solanus.

As the liturgy began, the assembly sang the refrain “This is the feast of victory for our God…” and continued by witnessing the reading of the request for beatification, listening to a short biography of the life of Father Solanus Casey, the reading of the Apostolic Letter and the presentation of the decree. The picture of Blessed Solanus Casey, O.F.M.Cap., was unveiled and a song of thanksgiving was sung. The presentation of the Apostolic Letter was then presented to various individuals.

The Gospel of the beatification Mass focused on a special passage from the Gospel of Luke 11:10 that inspired Blessed Solanus throughout his life. Jesus speaks, “Ask and you shall receive; seek and you shall find; knock and it shall be opened to you.”

I believe it is a blessing that his beatification came on the eve of the first World Day of the Poor promulgated by Pope Francis.

“Thank God ahead of time” was a theme in the life of Blessed Solanus. He witnessed faith, hope and charity through his ministry to people no matter their creed, race or age. His compassionate attention to individuals continues to be an inspiration for myself and for many around the world. I was blessed by walking this pilgrimage and being a witness to the beatification of Blessed Solanus Casey. I continue to hear Solanus stories and personally experience how this humble, contemporary friar influences not only my life, but also the lives of many. The journey of faith continues.

Blessed Solanus Casey will be remembered by the church each year on July 30. 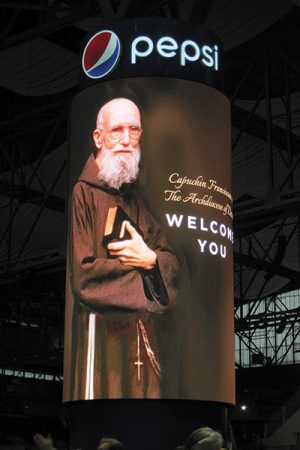 The welcome sign at Ford Field in Detroit, Michigan.