The Sisters of the Precious Blood were recipients of the United Theological Seminary Distinguished Ministry Award during a ceremony held May 17. Dr. Kent Millard, president of UTS, and James Tharp, chair of the board, presented the award to the Congregation, and Sister Ceil (Ellen Mary) Taphorn thanked them for the award, as well as for the seminary’s ministry of educating faith-filled servants for the church.

United Theological Seminary was founded in 1871 by Milton Wright, the father of the Wright Brothers. Affiliated with the United Methodist Church, it serves students from many Christian denominations and offers a range of degree programs in ministry and theological studies.

Millard noted that Sister Judy Niday has been a director in the UTS spiritual formation program for more than six years. Sister Marita Beumer serves as a board member.

Also in attendance at the ceremony were Sisters Mary Garke and Joan DeChristopher, who represented Salem Heights. Over the years, the Sisters have collaborated with UTS so that the YMCA can provide a swimming program for area children, and students and staff have housing at Salem Heights. Just recently, the Sisters helped with a land transfer which was mutually beneficial for both the Sisters and the seminary.

This spring, UTS was awarded a grant from the CPPS Heritage Mission Fund for virtual classroom technology, which allows students to connect with faculty and other students around the world. The Sisters have always had a cordial relationship with United Theological Seminary, especially now that their campus is our neighbor on Denlinger Road. 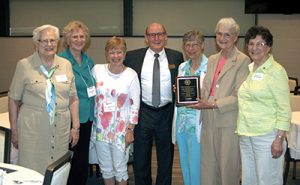