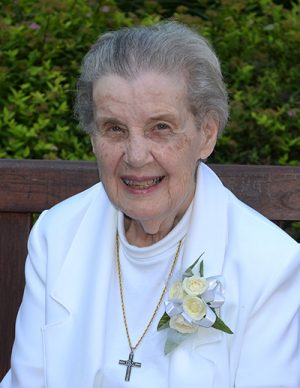 Sister Berenice Janszen, one of three Sisters celebrating their 75th Jubilee, spoke on behalf of her class and shared some of her memories with those assembled at the Jubilee luncheon.

There are three of us in this group, and we started out with nine young women. And we were young. Many of those young people [in our class] were in their early 20s. There were a few even in high school. But we all felt we knew the world; that we knew everything there was to know; that if there was a problem, we could solve it. But we had one idea: We all wanted to be Sisters of the Precious Blood. So we all came to Dayton to learn how to do that. And when we came, we learned very quickly that we did not know it all. There was much, much to learn.

That was 75 years ago; that was 1943. Many of those that came were experiencing World War II. Friends and relatives had to go to war. The hit song of that year was “Oh, What a Beautiful Mornin’.” The stage show was Oklahoma! Some of the movies that were popular at that time were The Song of Bernadette and This Is the Army.

The young women who came to the Congregation were excited about who they were and what they had to give. In the ’40s, the church was very concerned about what the liturgy was all about. We had to learn what that word meant. We had to learn what you had to do to make a good liturgy. So we had lots to learn. And at the same time, the church was telling us that many of us did not know enough about the Gospels. I remember when I was a postulant, that was the first time I received my own personal little Bible of the Gospels. And so we got to learn who Jesus was. We were told to read and meditate. We got to learn what meditation was all about, and that was a whole new thing for many of us.

And as we were doing that, we found out that not only did we have to learn about the Gospels, but we also had to learn how to share it with others. So we began going to small group meetings to share it and it was then that we learned that we didn’t know much about ourselves. What kind of persons were we? And so as time went on, we became introduced to the Myers-Briggs personality indicator; the Enneagram became really important to us; we talked about temperaments and what that had to do with us. So we were busy people.

And then after we learned all that, we discovered that we also had to become proficient in a ministry. And that meant opening up whole new areas of going to a university and workshops, and that was exciting, too. Then during all that, we discovered that we really could not learn how to excel in our ministry unless we knew something about the Precious Blood. And so the charism, our charism, became a part of whatever ministry we were involved in. And that was the beginning of opening whole new realms of who we were as Precious Blood Sisters: What did that mean to us and to all the world?

And so we were really busy in those days, and they were wonderful years. And we are so grateful today for all the people that helped us grow. I think of the many Sisters who have died. They’re up there in heaven today, and I hope they know that we appreciated their patience with us, and their effort to help us grow and learn what they had learned.

We really want to thank all of our Sisters who have been with us, who have helped us mature in our vocation. We hope that you will continue working for the spirit of the Precious Blood, helping us to keep growing in what that charism means, because every day, there are new things to embody what that means. So we are grateful. We thank every one of you. Thank you, thank you, thank you.