Timika: wrestling with death and life

This November, Cornelius German — better known as “Cornbread” — would have turned 21, but on April 22, 2013, he was gunned down by a 21-year-old seeking revenge. The gunman later revealed to authorities that he didn’t kill his intended target.

That spring evening, as Timika and her husband neared President Obama’s Secret Service protected house, they heard, “A little kid got shot,” and as Timika tells it, “Everything in me, my whole soul and body, knew it was Cornbread.” She ran to the site and fell to the ground. “Yes, my baby … gym shoes and jacket … yes, my baby … dead!” Later, witnesses told her that his last words were, “Call my mama!” And she wept.

As she stood there for three hours while police searched the scene, she told of her wrestling with death, with God. Reflecting over her life, she suddenly felt a lifting of her heaviness as if Cornbread was taking her pain, her past, with him. Her life changed in this darkest of moments; she seemed to feel a resurrection, a real God moment. Three weeks later she was baptized at her church and she has not looked back, despite the ongoing challenges of life.

A year after Cornbread was killed, Timika’s sister died. Sometime later, her older son was incarcerated and then her husband Ron struggled for over a year with health issues. Timika did not allow this struggle to disrupt her faithfulness to her new way of living. She continued going to work each day and then to the hospital to be with her husband. On Tuesday, October 9, 2014, Timika called, asking if I could take her to the hospital. The hospital had called and told her that Ron had suffered a major stroke. As she sat by his bedside weeping, she still looked for hope, but there was none. “I have to let go again,” she whispered, “and let God be God.”

On the way home, I realized how privileged I was to witness such love, strength and acceptance of God’s plans. Timika is an inspiration to me and others; she does not run away from tragedy but holds her brokenness and lets it do its work: transformation.

Timika is very active in our Mothers programs, especially our monthly healing circles. No matter what she is going through, she can lift the pain of the mother who has just lost a child or have all the mothers doubled over with laughter as she pulls her wig off and shouts, “Halleluiah for wigs!”

The mission statement of the Sisters of the Precious Blood includes the phrase, “Be a life-giving presence in a broken world.” Every day I pray that I can be that for our mothers traumatized by the world around them — fearing for the life of their children, struggling with bills, searching for affordable housing, or just needing a bus pass to get to work. They tell of how these killings are dividing their families as they grieve their losses; they come to PBMR for healing, for peace.

PBMR is a home for so many — a place to feel safe, to feel love and acceptance, a place to call when trauma strikes home. PBMR gives each of us opportunities to witness the Paschal Mystery of dying and rising. As Timika so often says, “It took my Cornbread’s death to bring me to life, for I was so lost — and in ways, so dead — but Cornbread’s resurrection gave me resurrection.”

As we reflect on Timika’s story, all of us will continue to wrestle with God and with death and life, but let us stand strong, let go, and let God be God. 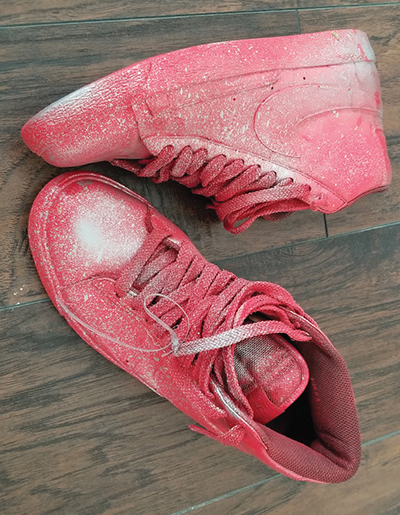