Sister Eleanor McNally recently celebrated her 100th birthday. She took some time to share a few memories — and a few secrets of longevity.

One hundred! Can’t be true, but would my mom and dad have lied? Of course not; the evidence is in. I am 100 years old! So here begins the story.

My mother brought me into this world on December 2, 1918, three weeks to the hour after the Versailles treaty ending the First World War was signed. The place was Hollywood, California, where my dad worked as a cinematographer in early motion pictures. Maybe that’s why my very first memory takes place in my father’s studio office of The Flying Ace. I see my little 3- or 4-year-old self petting the beautiful German Shepherd that lay sleeping under Dad’s desk. This was “Strongheart,” the first canine star of motion pictures, who had played a part in France during the First World War and who now was working for Hollywood. You will find his star on the Hollywood Walk of Fame (February 8, 1960) on Vine Street, incidentally the same street on which was our Hollywood home.

Fourteen years later, I entered the Sisters of the Precious Blood from St. Mary’s School in Phoenix where we were now living. Tough choice. Dayton is 1,800 miles away from Phoenix! There were times when I cried for loneliness to see my family, but through it all, I persevered. My teaching career (grade school, high school, college) began in 1939. This was followed by 11 years of administration and then work in parish ministry until I retired to Dayton in 2011.

How does one get through all the ups and downs of these many years? I have to say that without friends I would not have made it. Their support in times of grief and sorrow helped smooth the path to recovery. Without them, there would have been few of the truly joyous times. Most of my good friends have passed away, but I still feel their presence and love in my everyday life. Today I thank God for those friends I still have who support this old but very “stand-tall” Sister with her faithful walker.

I have discovered another key to making it through. I try not to worry unless I have to. If you worry and “it” doesn’t happen, you have wasted a worry. If you worry and it does happen, you’ve worried a needless second time. Added to this bit, but very important, is daily counting my blessings and thanking God for them.

There’s a third point I would like to make and it is the most important of all. While on retreat I watched two little ducks in the patio pool paddling away to keep up with their mother. Then came the day when all I saw was the mother duck sitting under a light fixture on the edge of the pool. It had been known that hawks sometimes swooped down and picked up the babies. A few moments of sorrow. And then suddenly out from under her wing popped a little head. Ah, this is how I have survived these hundred years: running for shelter under God’s comforting wings. Scripture tells me in Psalm 17, “Hide me in the shadow of your wings,” and in Psalm 57, “In the shadow of your wings I take refuge.” And with this comfort of my beloved God and Savior, I begin my next hundred years! 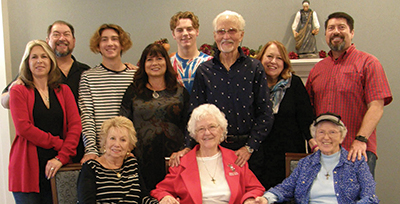