When a loved one passes away, the rituals and traditions that mark the end of life can bring comfort and peace to those who remain — but some of the processes used in modern burial practices also pose environmental concerns. As Sisters conduct their end-of-life planning, some are choosing “green” or “natural” burials in an effort to care for the Earth even after their own death.

During the Congregation’s 2015 Assembly, one of the directives articulated was to “act responsibly in the use and care of our planet’s resources.” The leadership team then considered how they could help Sisters fulfill that directive, said Sister Linda Pleiman, a congregational Councilor.

“One of the ways was to look at the spirituality of dying and all that goes with that, including funerals. So we have given our Sisters the option of ‘green’ funerals, which also helps in our care of the planet,” Sister Linda said.

According to the Green Burial Council, a California-based nonprofit organization that establishes industry standards for environmentally friendly burial practices, “green” or “natural” burial “is a way of caring for the dead with minimal environmental impact that aids in the conservation of natural resources, reduction of carbon emissions, protection of worker health and the restoration and/or preservation of habitat.” Biodegradable containers or shrouds are used instead of concrete burial vaults and metal caskets; the bodies of the deceased either are not embalmed or they are prepared using formaldehyde-free products. The formaldehyde used in the typical embalming process can seep into the ground and affect the surrounding soil and waterways.

In her end-of-life planning, Sister Benita (M. Denis Anthony) Volk has chosen a full body burial without embalming because, she said, “I love the earth. The earth has nurtured me throughout my life, both physically and spiritually. When I die I would like to return to the earth as naturally as possible. I want to nurture the earth with my flesh without adding unnatural substances like chemicals and metals. It’s comforting to me to imagine my body returning to the earth.”

For others, cremation is an option that is becoming increasingly common in end-of-life planning. The Catholic church has allowed cremation since 1963, but ashes must be placed in an appropriate vessel — not separated or scattered, but laid to rest in a sacred place such as a cemetery.

Sister Nancy (M. Alan) Raley noted that cremation itself is not necessarily a “green” process because “it consumes energy and possibly pollutes the environment depending on the technology of the crematoria.” However, burying the remains in a biodegradable urn or container “reduces the environmental impact and uses fewer resources for burial such as embalming fluid, casket and vault,” she said.

“We Sisters live a simple lifestyle and using fewer resources for burial seems to fit with this,” Sister Nancy added. “Also, I wanted my body to be useful in death by donating any needed organs if possible. Precious Blood Spiritualty is being a life-giving presence in life and at death.”

For Sister Mary (Thomas Miriam) Garascia, cremation and a green burial means “the ‘stuff’ of my body will be recycled by the earth. There won’t be concrete liners or metal in caskets or any other artificial things in the ground because of me,” she said, adding that “the simplicity of life that the vow of poverty asks us to live” also influenced her choice.

For Sister Judy Niday, choosing cremation carries on a family tradition that began with her parents’ burials. It also recalls the ashes received on Ash Wednesday, when the faithful are told, “From dust you were created and to dust you shall return.” Sister Judy said her brother made a maple wood urn for her ashes; on the top, he affixed a plaque bearing her name, a Precious Blood symbol and a short verse honoring her.

“That touched my heart so much,” she said. “I do try to live a simple lifestyle, and I think being cremated and using a biodegradable urn is the simplest thing I can do to let the earth be the earth.”

Sister Nancy (M. Rose Catherine) Kinross also has chosen cremation, with the ashes placed in a biodegradable urn. “I witnessed this type of burial in attending the funeral of a friend’s adult son,” she said. “The biodegradable urn was made of salt and was beautifully shaped such that it resembled an alabaster jar. When buried in a plot, the rainwater over the gravesite gradually dissolves the urn, allowing the ashes to be part of the earth. … This type of burial reconciles the ashes with God’s earth. It is environmentally ‘healing,’ I believe.”

For Catholic laypeople in the Dayton area who are interested in environmentally conscious burial options, Calvary Cemetery features the St. Kateri Preserve, a 5-acre conservation area with a lake, walking trails and area for natural burial. 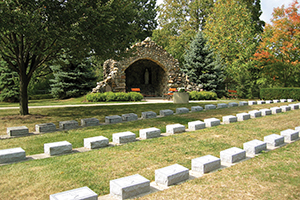 The cemetery and grotto at Salem Heights. Michelle Bodine photo

‘… The earth has nurtured me throughout my life, both physically and spiritually. When I die I would like to return to the earth as naturally as possible. …’