As Don Rosenbeck described the contributions of the 2016 Sr. Mary Friedburga Jaeger Memorial volunteer of the year at Maria Stein Shrine, Precious Blood Sisters Barbara Ann Hoying, Mary Ellen Andrisin and Regina Albers began to realize he was referring to one of them.

Actually, Rosenbeck, administrator at the shrine, was talking about all three.

The Sisters each received the 17th annual volunteer award during a ceremony April 14 at the shrine.

The sisters are former employees of Maria Stein Shrine and have continued to volunteer there. The award honors a volunteer who through example and accomplishment has provided outstanding volunteer service through the years. The volunteer’s contributions to Maria Stein Shrine in keeping with its mission are considered in determining the winner of the award.

Sister Barbara Ann, of Minster, was the director of the shrine – formerly Maria Stein Center – from 1997 until 2010. She then served as director of mission and spirituality until her retirement in 2013. She now offers spiritual direction at the shrine and serves as a receptionist.

She established the volunteer award when she was the shrine’s director, but didn’t expect to one day be a recipient.

“To say I was surprised would be an understatement,” Sister Barbara Ann said. “We appreciate (the volunteers) who give us the helping hand that we need to continue to do the ministry that we do there, to touch other people’s lives.”

Sister Mary Ellen, a Dayton resident, worked in hospitality and events at the shrine from 2005-11. Sister Regina, who lives in Chickasaw, was the curator of the relic shrine and heritage museum from 2001-14.

All three sisters are highly-sought shrine tour guides and have served on various shrine committees, Rosenbeck said. They have also helped with programs. Many committees have benefited from their presence, insights, spirituality and knowledge.

Sister Regina, who grew up near the shrine and regularly visited it as a child, was caught off guard at the award ceremony.

“I wasn’t thinking that they would give three out,” Sister Regina said. “It was a very nice way of doing it. We all gave the same love and commitment to the shrine.”

In addition to giving tours, Sister Regina helps at the reception desk and works on activities, as needed. The shrine has always held a soft spot in her heart.

“It’s a place of peace and comfort and joy,” she said.

Sister Mary Ellen serves on committees and helps with planning. As an employee at the shrine, she enjoyed the different groups that visited.

“I think the thing I really enjoyed the most was just interacting with the people,” she said. “People came and wanted to pray. All those contacts were just very, very enriching.”

The award holds special significance for the sisters because of Sister Mary Friedburga, who worked and lived at Maria Stein for years.

“She was just a very welcoming person and really easy to talk with,” Sister Mary Ellen said. “She really instilled a great spirit of welcome and hospitality at the shrine.”

“I was just really pleased that they decided to honor the three of us who still volunteer at the shrine,” Sister Mary Ellen said. “I guess we’re the last Sisters of the Precious Blood who will be there. I thought it was a good way to celebrate our relationship with the shrine.” 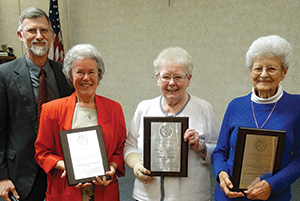