During a Mass celebrating the death of Maria Anna Brunner on January 15, Sister Dorothy Schmitmeyer spoke from her experiences as a missionary in Chile, reflecting on the life of Mother Brunner, foundress of the Sisters of the Precious Blood. Here are excerpts of Sister Dorothy’s address.

There are saints who are patrons (supporters) of certain areas of Christian life; like patrons of missionaries, etc. I’d like to call Mother Brunner patron of support groups. Groups that gather together to share what others are living, suffering or experiencing, just as they had.

“Mother Brunner gave up her teenage years to help educate her brothers and sister. At the age of 12, she began working for her father and at the age of 14 she left home and became a live-in maid in the Brunner home. She served from early morning until late at night for 15 years, during her teen years and beyond.

“Mother Brunner is the support for many women who are or were live-in maids working from early in the morning to late at night and sending their paychecks to help educate their siblings. When I was in Chile, we had two cooks working at the age of 13. One of them always longed to learn how to read. She walked past a school when she went to buy bread for the family to which she was a maid. She would stand by the window and watch the teacher. Sister Cyria taught her how to read the instruction of knitting. A lady in our chapel was much like Mother Brunner except she never married, but she would be in chapel an hour before Mass and kneel in the first pew where she placed on the altar many who need prayer. Yes, Mother Brunner is a support to all these women who gave their teenage life for their families.

“Maria Anna and John in the beginning of their marriage lost their first child before she was two years old. Yes, Mother Brunner is a support for parents who have lost a child or one who is ill. Many ask us to put their name in a notebook we have at the feet of a statue of Mother Brunner in our chapel.

“Maria Anna is a support to many who have to make long walks in order to attend Mass or attend meetings to prepare their children for the sacraments. It is through the faith of a mother or grandmother that the next generation grows in faith because of these long walks.

“Mother Brunner’s husband was not the most pleasant person. He had a sort of pessimistic and negative personality. She saw the bright side of life. For all the women’s groups I guided in Chile, Mother Brunner was their patron saint.

“They asked her for the grace to have patience to live with a ‘macho’ husband.

“Mother Brunner was the baptismal sponsor for 20 babies. She was a source of support for many grandmothers and aunts who took in the child of a daughter, niece or granddaughter to raise and give them the mother’s love that their own mothers could not give.

“Mother Brunner’s husband died at an early age and as she buried her husband and looked over her shoulder, seeing her four youngest children ages 14, 11, 8 and 5, becoming a single parent, she became a single parent for all single parents. Mother Brunner worked many miracles healing parents who were at death’s door.

“As we walk the last walk of our life entering into our Assembly 2015 and we ask ‘what more,’ may we pray with Maria Anna to hear the need of God’s people and how we can respond with sharing the power of the Precious Blood.” 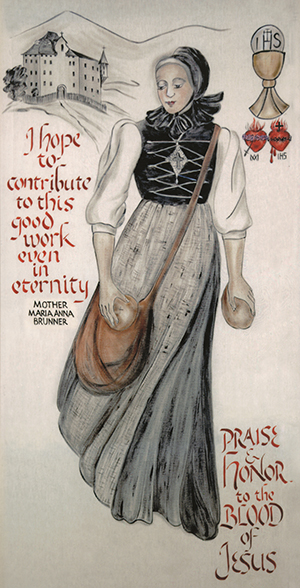 A banner of Mother Brunner painted by Sister Eileen Tomlinson.