Growing up on a farm in a small Michigan town, Immaculate Heart of Mary Sister Kathryn Pierce assumed everyone in the world was white, Catho­lic, Irish and a Democrat. It wasn’t until she joined her re­ligious community and began ministering in Puerto Rico that she realized just how lim­ited and biased her cultural experience was.

Sister Kathryn, executive director of Intercultural Con­sultation Services, shared that recollection during a work­shop on multiculturalism Feb. 28 at Salem Heights. The story helped illustrate how narrow we can be in thinking about culture.

“That was my cultural up­bringing,” Sister Kathryn said. “I think if we all look back into our families, we can see what was there. What were the values and beliefs? That’s how we started out and un­til there was some kind of a change, we continued living that way.

More than 50 people at­tended the workshop includ­ing Precious Blood Sisters and members of the Congre­gation’s Vocation Ministry Committee, who will use the information in their efforts to promote vocations to the Sis­ters of the Precious Blood.

In her presentation, Sister Kathryn urged participants to identify things they can do – as individuals and together – to promote multiculturalism.

“We know that as commu­nity builders our business is to be able to recognize the differ­ences in culture, in religion, and to be able to not let those differences separate us be­cause it would be pretty bor­ing if we were all the same,” Sister Kathryn said. “Each one of us is a cultural being. We come with a unique culture, but we come together to form a group.”

In opening the workshop, Sister Kathryn distributed an image by artist Wade Davis depicting numerous symbols. She asked the participants to envision the image as a prayer collage and identify the sym­bols associated with various cultures.

Among the symbols was the depiction of a white person as being dominant. Although that has been the norm in the United States, it is changing.

“Very soon the white will not be the dominate culture here in the United States,” Sis­ter Kathryn said. “Very soon, even though we may act and think we are. That’s what we have to be very careful of, and that’s what makes intercul­tural living so difficult because we think we come from the dominant.”

Davis’ image also had a reflection that the participants contemplated: “The world in which you were born is just one model of reality. Other cultures are not failed attempts at being you; they are unique manifestations of the human spirit.”

That can be a blow to the egos of some in the United States because we have the im­pression that everyone wants to be like us, Sister Kathryn explained. We think we might be the superior race. Still, she continued, think of how dif­ferent the world would be if we accepted each other. It has to start with each of us and the communities to which we belong.

“It’s got to start here,” she said. “How can we do that? It’s going to demand a real transformation. We need to be missionary in our everyday activities.”

In helping to bridge the gap between cultures, Sister Kath­ryn also discussed various elements of effective conversa­tion across cultures and the analogy of culture as part of the daylong workshop. 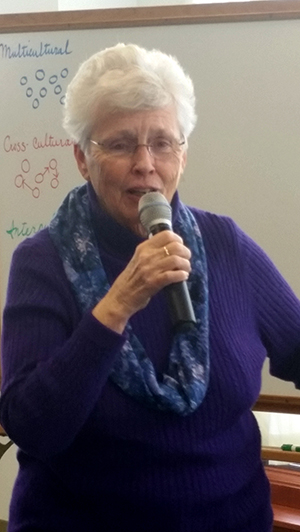