‘Stepping up the Call’ challenged, educated

CARTHAGENA – Call it ‘Jeopardy’ with a twist.

More than a dozen people attended the annual ‘Stepping up the Call’ pilgrimage at St. Charles Center Nov. 17 to test their knowledge and learn more about vocations in the Catholic

Church. Representatives from the Cincinnati Archdiocese and affiliated Catholic organizations set up stations to share information and quiz participants’ knowledge about specific vocations. Groups included Precious Blood Sisters, Missionaries of the Precious Blood, the permanent deaconate, archdiocesan priests, the Serra Club and the Knights of Columbus. There were also representatives from married life.

In a new format, participants formed teams to answer questions about each vocation and competed for prizes. The three teams with the most correct answers received small medals. Participants were quizzed on such things as the origin of the vocation and its role in the church. Sisters of the Precious Blood, for example, had a list of questions on the history and charism of their Congregation. 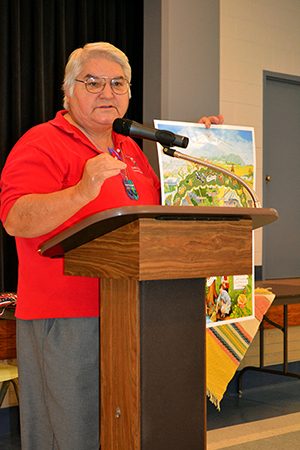