More than 50 people took to the streets in northwest Dayton to call for peace Nov. 10 after a 5-year-old was shot while sitting in his living room and later died.

Sisters of the Precious Blood Jeanette (M. Paul Agnes) Buehler, Pat (Terence) Will, Judy Niday, and Ceil (Ellen Mary) Taphorn joined area residents, police officers and community leaders in a me­morial walk for Maleki Parker. The toddler was in his home on Nov. 7 when a bullet from a drive-by shooting entered the house and hit him. He died two days later.

Chanting “Don’t shoot, we want to grow up,” and other slogans, the marchers walked past the Parker’s home and around the block. The Sisters held hands and prayed during the walk.

For years, the Sisters of the Precious Blood have organized a vigil each time there is a ho­micide in Dayton. Friends or family members of the victim often join the Sisters and other residents at the location where the homicide occurred to pray for the person who died. The Sisters also host a memorial service at Salem Heights each January to remember those who were killed by violence in the community during the previous year. 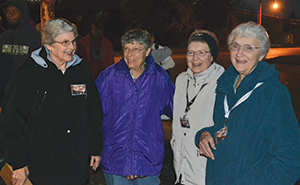