El Salvador is a small Central American coun­try about the size of the state of Massachusetts with a population of over 6 million. During 12 years of civil war from 1980-1992 there were many killings, massacres and martyrdoms.

I had been asked by our community council to consider being part of a delegation there from Nov. 28 to Dec. 5 in commemoration of 35th an­niversary of the martyrdom of Ursuline Sister Dorothy Ka­zel, Maryknoll Sisters Maura Clarke and Ita Ford, and lay missionary Jean Donovan of the Cleveland Diocese.

One of the days we were there we visited the wall (something like the Vietnam Wall in Washington, D.C.) that contains the names of over 30,000 people who were mur­dered or disappeared during the Civil War. There was also a very long list of sites where massacres occurred. While there, SHARE held a press conference asking for justice for the women. Some of the soldiers who did the killing were tried, sentenced, and jailed but those who ordered the killings have not been brought to justice.

We also visited the crypt of Archbishop Oscar Arnulfo Romero, who was shot to death while celebrating Mass in 1980. While at the garden of Romero’s house, we encoun­tered a young man who told us that he has been a follower of Romero since he was a child. He attended Romero’s funeral and was in the midst of the crowd when a bomb went off in Cathedral Square. He remembers running when he heard shots being fired into the crowd. He and his brother both escaped unharmed, but 30-50 people were killed.

On December 2 we went to the site where the bodies of the four women were found, now the site of a beautiful chapel. We walked in silence part of the way down the road the women were taken after they were captured. Mass was concelebrated by sev­eral priests and bishops. The crowd kept growing. There was not room for everyone inside of the church, so many people were sitting or stand­ing outside of windows and doors. Also at the Mass were family members of Sisters Ita and Maura. There was a representative from the Dio­cese of Cleveland. There was also present the daughter of Ambassador Robert White, who had taken up the cause of justice for the women. What a memorable day!

We visited the University of Central America, where six Jesuit priests and their house­keeper and her daughter were murdered in 1989. It seems to be such a peaceful place today, brimming with life.

Another memorable day was when we visited San Antonio de Los Ranchos and Guarjila in the department of Chalatenango. This area was home to sites of the first re-populations of refugees returning to their homes after the war. During their time in El Salvador, the church­women worked with these refugees. On the way there we stopped at the cemetery to visit the graves of Sisters Maura Clarke, Ita Ford, and Carla Piette (who was caught in a flash flood and drowned). The people there welcomed us warmly, led us into their chapel for Mass in honor of the women, then fed and entertained us. It was great to hear the stories of some of the women who have formed organizations to help other women.

There were really too many memorable experiences to recount. I am sure this trip will remain a part of me for many years to come. SHARE-El Sal­vador is already planning the one for five years from now to commemorate the 40th anni­versary.

[Ed note: Sister of the Precious Blood Ann Clark was part of del­egation to El Salvador sponsored by the Leadership Conference of Women Religious and led by SHARE-El Salvador to commem­orate the 35th anniversary of four martyred. She shares this account of the experience.] 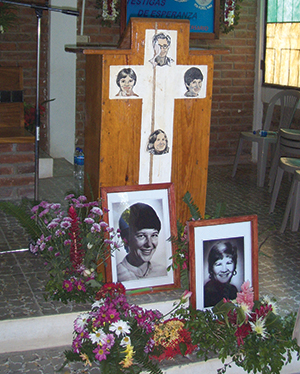