DAYTON – It was a visit nearly 70 years in the making.

As a high school student at San Luis Rey Academy (SLR) in the 1940s, Mary Ann Lee often heard the Precious Blood Sisters at the California school talk of their motherhouse back in Dayton, Ohio. They spoke of the complex with reverence, pride. Mrs. Lee grew close to the Sisters and wanted see the central house herself.

A visit to Dayton remained on her wish list for decades. Life kept getting in the way.

She graduated from San Luis Rey in 1944, married a naval submarine officer and had two sons. Once her boys were grown, Mrs. Lee took a job as a receptionist at an assisted living facility near her home in San Diego and eventually became its administrator. After her husband retired from the U.S. Navy, he took a job with a federal agency and the two travelled for his work. They were once passing through Dayton, but weren’t able to stop and see the Sisters’ house.

The wish remained just that. “It would pop up every now and then,” Mrs. Lee said.

In 2006, while still living in California, Mrs. Lee received a copy of Sharing & Caring from a neighbor. Precious Blood Sisters Katie Lett and Eleanor McNally met the neighbor by chance, learned that Mrs. Lee was a SLR graduate and provided the Sharing & Caring issue.

Mrs. Lee held onto the newsletter when she moved to Illinois in 2007, a year after her husband’s death, to be near her sons. Fast forward to last fall, when she came across the old copy of the newsletter and made a call to Dayton. She asked if she could tour Salem Heights.

She and her son, Charles “Skip” Lee, arrived Sept. 23, 69 years after her high school graduation. They toured the house, chatted away the afternoon with Sisters Katie and Eleanor, and reminisced.

“It was just a wonderful experience and I’m so thankful I was able to go,” Mrs. Lee said. “It more than fulfills my wish.”

She recalled Sister Mary Anetta Schneider, who ministered at the school from 1913 to 1950. Mrs. Lee was homesick during her first months at the SLR and wanted to go home. Sister Anetta gave her two choices: “She said I could either stay there and be miserable or stay there and enjoy myself,” Mrs. Lee explained. “I enjoyed myself.”

In her working life, Mrs. Lee followed Sister Anetta’s policy of keeping an open door for employees. Sister Anetta also encouraged her to find her place in the world and that she can accomplish anything she to which she sets her mind. “I was very close to Sister Anetta,” Mrs. Lee said.

After graduation, she maintained a relationship with the Sisters at SLR and still visits the former school.

Since returning home, Mrs. Lee continues to talk about her trip to Dayton.

“When I came away from visiting, I felt I could lay down that night and be very content. It was wonderful to be there.” 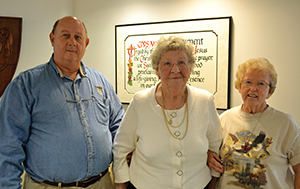 Mary Ann Lee, center, with her son, Skip Lee, and Sister Katie Lett pose during the Lee’s visit to Salem Heights on Sept. 23, 2013.