Looking back on 14 years as a pastoral coordinator at parishes in three states, Sister Mary Garascia focuses on certain moments.

“You get to walk with people in very unusual situations like grief or sacramental life, heartaches and moments of great joy. You get to be part of people’s sacred moments with God,” she said. “It’s been a privilege to be a part of people’s lives that way.”

Sister Mary retired as pastoral coordinator at Holy Name of Jesus Parish in Redlands, Calif. on July 1 after serving in the role from 2008-14 and in parts of 2015 and 2016. She previously held similar jobs at parishes in Ohio and Michigan.

Under the pastoral coordinator trained model of parish leadership a layperson is responsible for all aspects of running a parish. Priests may be on staff, or they may be priests serving other parishes, but they have no “line” authority and are called “sacramental ministers.” Sometimes they are retired priests. The model is provided for in Canon Law 517.2 for situations when there is no priest available to administer a parish.

At Holy Name of Jesus Sister Mary helped unite a parish that was formed by an unpopular merger of two Redlands Catholic parishes, one predominantly Hispanic, and the other not. She bonded with parishioners and began a building project that will bring the parish together in one location. The success came about through collaboration between Sister, the parish staff, and the parishioners.

“Our parish is so much better off for her having been here,” said Sharon Callon-Schwartz, director of pastoral life and communications at Holy Name of Jesus. “She elevated the expectation of staff members. She held us accountable to the people.”

That staff and parishioners gave Sister Mary a long goodbye during her final weeks at the parish. A surprise party drew about 150 people from with whom Sister Mary worked closely on committees. The pastoral council held another gathering and there was a reception after the Masses on June 26. Sister Mary even got into the act by cooking lunch for the staff at the office in last week.

In May, the Diocese of San Bernardino honored Sister Mary with the St. Bernardine Award for her work at Holy Name of Jesus.

Sister Mary will remain active in the parish and diocese as a lector, teaching and taking Communion to the sick, and teaching in the RCIA and faith formation programs. She also plans to volunteer in adult literacy through a program at the local public library and volunteer at a homeless shelter.

“I’ve been able to work with God and some good people to bring about parish unity, particularly multicultural unity,” she said. “I couldn’t have done it unless they were willing to be led that way. I’m just very grateful.” 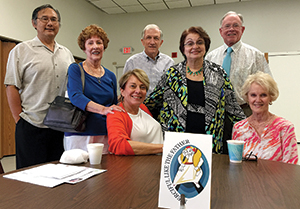