For nearly 20 years Sister Joyce (Joyce Miriam) Kahle put the health of people in Cincinnati’s Clifton and Mount Auburn neighborhoods first. At celebrations last June, those she served thanked her.

Sister Joyce retired in June as an outreach nurse for TriHealth Cincinnati after 17 years. In addition to working with area residents, she served as a parish nurse for Holy Name Church in Mt. Auburn and Clifton United Methodist Church.

She was the honored guest June 23 at Clifton United Methodist as parishioners, friends from her small faith group at Bellarmine Chapel and several Precious Blood Sisters celebrated her years of ministry. There was plenty of laughter and a few tears as Sister Joyce spoke of her work with the parish community.

“It has just been a beautiful journey with this congregation from day one,” Sister Joyce said. “I have grown so much in my own faith through this community.”

Parishioners said she helped them monitor their medical vital signs and educated them on staying healthy. She offered healing touch to people after surgery, helped residents get into nursing homes when necessary and assisted in getting them medical equipment.

“She has skills, but it was her heart that brought a special presence,” said Rev. Suzanne Fountaine, former pastor at Clifton United Methodist. “She had a passion for the people Jesus cared so much about.”

She was also active at Holy Name. She was there most Sundays taking parishioners’ blood pressure readings and talking with them about how they were feeling.

“The mission of outreach nursing is to journey with and empower others as they move toward health and healing in body, mind and spirit,” Sister Joyce said.

“She took an active interest in the leadership of the parish and where we were going. She was part of that whole caring atmosphere we wanted to create in our parish,” Father Desch said. “We just knew her as a good friend.” 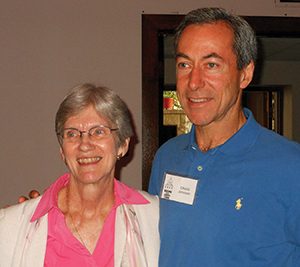