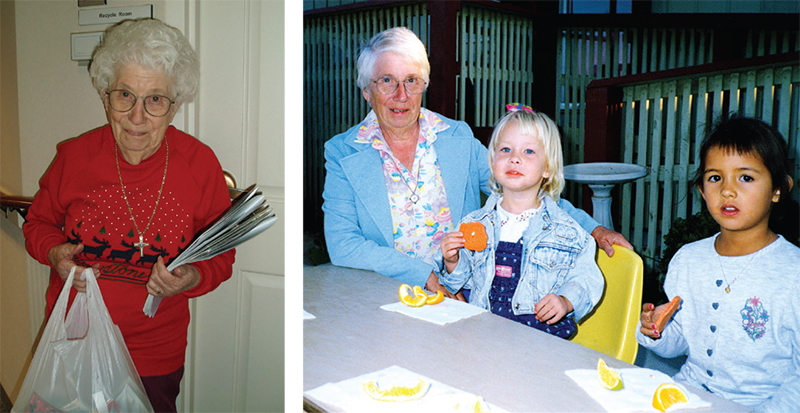 In a lounge at the Sisters of the Precious Blood central house in Dayton a few days after celebrating her 99th birthday on May 30, Sister Gladys Marie (M. Bernetta) Lowe reminisced about her life of ministry that has lasted for 83 years.

There were plenty of smiles and a few chuckles as she recalled stories of ministering at Mission San Luis Rey in Oceanside, Calif., a place where warm ocean breezes kiss a history now more than two centuries old. Sister Gladys spent 19 years at then-San Luis Rey Academy and Old Mission Montessori School. She ran the Academy student lunch store and, later, at Old Mission Montessori School worked with the students. She also helped the needy through The St. Vincent de Paul Society.

Her favorite time, though, was the annual summer fiesta, a 3-day extravaganza that was one of the largest in California. Sister Gladys ran a booth that sold everything from trinkets to toys to jewelry. The items were donated.

She was so popular that shoppers would often show up on Thursday, before the event opened, so they could get an early jump on shopping at Sister Gladys’ booth.

The annual event continues and the booth remains the Sister Gladys Booth.

“She was a fixture here for a number of years,” said Cyndi Ottle, an office manager at Old Mission Montessori School.

“She would collect items all year long. The teachers and the staff run that booth in honor of her because we love her so much. It’s a booth that is near and dear to our hearts.”

Sister Gladys had already been a Sister for 33 years when she first arrived in California in 1966 to work at Immaculate Heart Seminary in San Diego. She was there until the adjoining minor seminary closed in 1970, and then spent a year ministering at St. Thomas Seminary in Denver.

She returned to California in 1971 and went to San Luis Rey. Much of her work at the Academy and Old Mission Montessori was taking care of the younger students. She had lunch with them and monitored them on the playground after school until they were picked up by their parents.

Her impact was so strong that teachers and staff still remember her, and Sister Gladys occasionally sends notes to the school.