Sisters of the Precious Blood welcome Sister Bela to novitiate 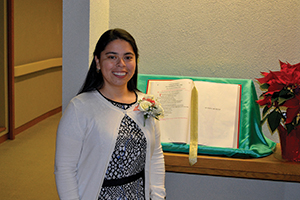 Amid smiles and hugs, Francisca Belarmina (Bela) Mis Guamuche entered the novitiate of the Sisters of the Precious Blood on Jan. 15 during a prayerful 40-minute ceremony at Salem Heights.

As a novice, Bela wears the congregational insignia and holds the title “Sister.” Though not professed, Sister Bela will live poverty, chastity and obe­dience in community as she further discerns her calling to religious life.

In reflecting on the evening’s gospel reading from Matthew in which Jesus called his first disciples, Sister Joyce Lehman, president of the Precious Blood Sisters, likened Sister Bela’s experience to that of Pe­ter, Andrew, James and John. They left all they had to follow an uncertain path.

“This call is the same as we whom you are choosing to join have heard,” Sister Joyce said. “Jesus no longer physi­cally walks by and calls us, but we know the call and recog­nize the caller as clearly as if we heard his actual voice. He has called each of us to leave all and follow, to trust and to hope, to be joyful and to reach out, and to companion each other as well as those to and with whom we minister.”

A native of Guatemala, Sister Bela was raised in a Precious Blood parish there and got to know several Sisters of the Precious Blood who are minis­tering in Guatemala. She came to Dayton in 2013 to begin initial religious formation and study English at the University of Dayton. Sister Bela holds a bachelor’s in social work from the Universidad Mariano Galvez de Guatemala.

During the 2-year novi­tiate, Sister Bela will live in the novitiate community and participate in all aspects of community life. During the first year – the canonical year – she will participate in the intercommunity novitiate program, and will study the history and constitutions of the Congregation as well Pre­cious Blood spirituality. The second year will be spent in ministry.

“You are not alone,” Sister Joyce told Sister Bela during the entrance ceremony. “We will encourage you in the difficult times, and urge you to keep going if you become disillusioned or disappointed; we will support or challenge you in the decisions you make along the way; we will rejoice with you in both the little and big victories of life and we will hold you in prayer at all times.”

Sisters Ann Clark, novice director, and Marita Beumer spoke of Sister Bela’s readiness to enter the novitiate. “I think she is very much in touch with the God who is calling her to this life,” Sister Ann said.

Sister of the Precious Blood Joyce Langhals, director of initial formation, was the pre­sider at the ceremony.