Sister Nadine Kaschalk had no idea why Oblate of St. Francis de Sales Father David Whalen, pastor of St. Pius X parish in Toledo, was calling her when she picked up the phone last fall.

After all, Sister Nadine didn’t even know the priest and it had been 22 years since she worked at the parish school, first as a teacher and later as principal.

Then Father Whalen asked if he could set up an annual scholarship in Sister Nadine’s name. It got her attention.

The scholarship will be given to a parishioner at St. Pius X who is going into the eighth grade at the parish school, Father Whalen said. The award will be given based on financial need. The amount of the schol­arship will be dependent on investment earnings, but the goal is to award $500 annually.

Chase Oukley received the inaugural scholarship at the 11:30 a.m. Sunday Mass on Aug. 14. Sister Nadine attend­ed the Mass and met the boy.

“He was all smiles,” she said. “I was honored and pleased that they offered it in my name and pleased they were having a scholarship started for the students. I was glad to hear the good Catholic education that was started was still go­ing on.”

The scholarship was funded by two anonymous donors, former parishioners, who asked that the mon­ey be used in honor of Sister Nadine.

“They were con­nected to the parish when Sister Nadine was here as principal,” Father Whalen said. “They felt very close to her when she was principal and respected what she did with their children.”

Sister Nadine taught second grade at the school from 1981- 84 and was then principal until 1992.

“I found it to be a very good place to work. The teachers were well-prepared, loved the kids. The parents were sup­portive and cooperated and the pastor worked with us in the school,” she said. “I have fond memories.” 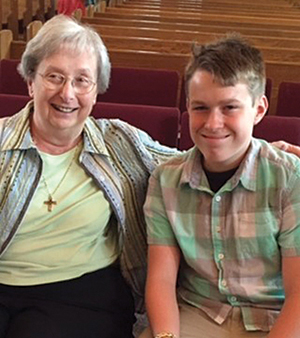