The woman was anxious, depressed. She spoke of suicide. She explained where she had hidden the gun and mentioned where the bullets were. She saw no purpose in living any longer.

As the woman talked, Sister Lou Ann (M. Charmaine) Roof knew it was time to act. So Sister — who was counseling the woman — refused to let her go home and called her son. She made the woman sign a suicide contract promising that she wouldn’t hurt herself or anyone else without talking to someone first. Eventually, the woman was admitted to a psychiatric ward. Sister Lou Ann figured the woman would hate her for interfering, but one day the woman came by for a visit.

“She put her arms around me and started to cry,” Sister Lou Ann said. “She said ‘because of you I’m here today, I’m alive.’”

It was a powerful moment, but Sister Lou Ann knew it wasn’t her own efforts that brought the good outcome. It was simply God working through her and her ministry.

It’s a sentiment Sister Lou Ann experienced over and over during 21 years of counseling people in desperate situations. She spent 11 years counseling inmates at an Ohio prison, and 10 more years as a counselor at Pathways Counseling Center in Ottawa, Ohio.

“I would sit with an inmate and always put myself in God’s presence,” Sister explained.

She would ask God to give her the expression the inmate needed to see and the words the inmate needed to hear. She would let herself be God’s instrument to reach those troubled souls. They were going through terrible times, but she let them share and gave them hope. The stories were gut-wrenching.

She recalled one young man who had gotten drunk and tried to grab a police officer’s gun. The man was engaged and wedding invitations had been mailed when he was sent to prison. Sister Lou Ann knew the man’s family as well as the man’s fiancée and her family. She also knew he had made a mistake and that if given a second chance, he would stay out of trouble.

Sister Lou Ann urged the man to stay strong and adjust to prison life as best he could. She would help him, but wouldn’t coddle him. She kept in contact with his mother and worked with the parole board for his release. The fiancée’s mother wanted her daughter to cut off contact with the man, but Sister Lou Ann discouraged that. When the man was released, Sister Lou Ann warned his mother to be strict and stern with him or he would end up back in prison.

The man ended up marrying his fiancée and having children. He’s never again been in trouble. Whenever Sister Lou Ann sees the family, she always gets a tight hug and a kiss.

“I think he is the person he is today because of the road he walked,” Sister Lou Ann said. “I felt God called me there for a purpose. I truly believe it’s God’s work, not ours.”

Growing up in rural Glandorf, Ohio, Sister Lou Ann wanted to be a teacher. She came to the Sisters of the Precious Blood for high school to get an education, but not sure she wanted to become a nun. During her junior year, however, she was given an opportunity to join the community and felt God’s call. She didn’t know it at the time that her mom was terribly upset with Lou Ann’s decision to enter, and often cried. One of Sister Lou Ann’s younger siblings told their mother that if she was so upset to just go to the convent and get Lou Ann, but their mother explained that we are not to interfere with God’s plan.

Sister Lou Ann began her ministry teaching in Arizona and taught in six schools over the next 12 years. She was then named principal in Versailles, Ohio, for two years and then spent 10 years as principal at St. Christopher School in Vandalia, Ohio.

She transitioned into parish ministry in 1971 when she was asked to help start St. Paul’s Parish, near Dayton, Ohio. The parish’s name was chosen to honor then-Cincinnati Archbishop Paul F. Liebold, who was instrumental in establishing the parish. Sister Lou Ann knew the archbishop from her days teaching at St. Rita School in Dayton, where two of the archbishop’s nieces were students. Archbishop Liebold would socialize with the Sisters after celebrating Mass at the convent, reminding them not to treat his nieces any differently because of their uncle.

On May 30, 1972, Sister Lou Ann graduated from Xavier University in Cincinnati with a master’s degree. Archbishop Liebold handed out 1,000 degrees that night, shaking every hand. He looked tired and had a severe headache. By morning he was dead, having suffered several massive strokes hours after the commencement.

“You just could not believe it,” Sister Lou Ann said. “Because I spent those years in St. Rita’s and he would come visit us all the time, I knew him as a person, not just as an archbishop.”

Sister Lou Ann continued working in parish ministry full-time in the Cincinnati and Toledo dioceses until taking the job at the prison in 1985.

That year, she also began volunteering part-time at St. Anthony of Padua Parish in Columbus Grove because she wanted to continue parish ministry. She started the Rite of Christian Initiation for Adults program, forming a team of parishioners from various walks of life. She continued volunteering at St. Anthony’s until retiring last June.

The parish sent her out in style with a Mass and a reception, attended by several Sisters of the Precious Blood. They also unveiled a large stone commemorating the community’s 100 years of service to the parish.

“I was overwhelmed,” she said. “I was pleased with the recognition of the congregation, not just me as an individual.”

Sister Lou Ann is settling in to Salem Heights by joining the choir and volunteering.

“God does interesting things,” she said. “I’ve never been at a place that I did not like.” 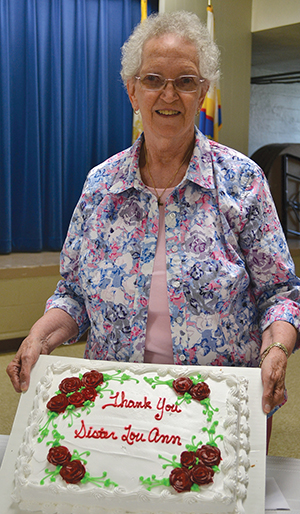 Above, Sister Lou Ann Roof at the reception for her retirement from St. Anthony of Padua Parish in Columbus Grove last June; photo by Sister Mary Lou Schmersal.

‘I felt God called me there for a purpose. I truly believe it’s God’s work, not ours.’