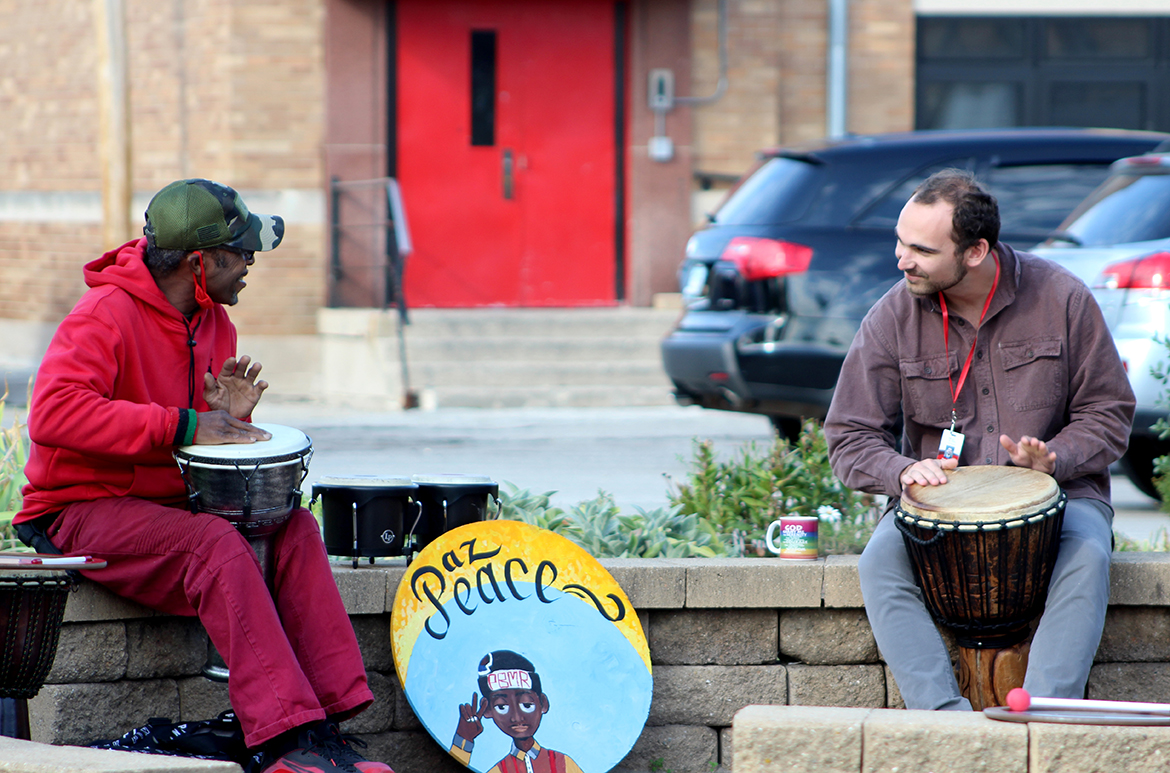 In our last staff meeting, Holly, our circle keeper, prompted us to reflect on accompaniment. She asked: What does it mean to accompany someone, and when have we been accompanied in our past? As we passed the talking piece, I heard an hour’s worth of stories detailing how PBMR staff have either walked alongside participants through the dark and lonely passages of life, or how friends and family have accompanied staff when they have struggled to find the strength to move forward.

There was a common theme in each story shared in our discussion of accompaniment: meeting another person where they are, without judgment, regardless of their past.

I came to PBMR for a year of service through the Precious Blood Volunteers program. I had no particular vision of how I would spend my days, other than mulling over vague romanticisms of “radical kinship” and “accompaniment.” Those imaginations quickly gave way to the harsh realities of relationship building and the particular challenges that come with accompanying high schoolers growing up amidst gun violence, drug abuse, and the specter of structural racism on the south side of Chicago.

Last week [Aug. 9-13] was the final week of One Summer Chicago, an initiative that provides Chicago youth with summer-long employment and enrichment opportunities. Alongside PBMR’s other employment programming, the Precious Records Studio hosted three young men as “production assistants.” Participants learned how the Precious Records Studio operates, how to record, mix, and master polished hip hop tracks, and how to make beats for local rappers and artists.

When we started Precious Records, we were making amateur demos in a corner of the Education Lab. After clearing out an unused bathroom, removing the toilets and stalls, putting down “sound treatment” (blankets and comforters from Goodwill), and installing air conditioning, the Precious Records Studio now produces rap music that trends toward professional sound quality while training youth in production practices and techniques. We started with one participant. Now, we have more clients than we can handle.

It hadn’t occurred to me until our staff meeting that the studio has grown the way that it has precisely because it is a vehicle for accompaniment: We meet the youth where they are. The genre of rap/hip hop is a staple of youth culture at the Center. We listen to rap in the car, we talk about rap over lunch, participants watch music videos while waiting for the bus. After a year of daily companionship with the PBMR youth population, I would say that for the majority of PBMR youth, rap is a foundational element of their identities.

Why this is the case could be the sole subject of another article. My point is that our youth need a space to express themselves through rap, and to facilitate each other’s expression through hip hop culture. Providing such a space is a mandate of Catholic accompaniment; we are commanded to walk alongside our siblings in Christ, to become like those that are suffering so that they might know they are not in isolation, but always in deep relationship with another.

What are the fruits of accompaniment? It’s not a simply answered question. (It seems to me that just about nothing is simply answered in restorative justice.) I might as well ask, “What is the result of deep relationship?” It could be anything. It might be momentary respite from a circumstance that makes life seem like a curse rather than a gift. It might be nothing. But it also might be trust, the kind that begets confidence in one’s own abilities to create. It might be the needed affirmation to be oneself.

When De’Savoyay, the inaugural Precious Records participant, walks into the studio, he knows that he belongs. He knows that he can walk over to the computer, turn on one of his songs, dance around, and that his peers will rap the words along with him. He knows that the Precious Records producers are eagerly awaiting the next “Des Da Realest” track. Esperdell, who has logged by far the most hours in production class, takes pride in knowing more production techniques than any other participant in the program. Jeremiah, our youngest producer at just 14, is already scheduling appointments with a few clients to work as their recording engineer. These boys are creating with holy joy because they know that they are welcomed in the Precious Records space, that their voices matter, and that what they create truly reflects their experience.

I don’t know much about accompaniment. Anything I have learned over the last year comes through the grace and blessing of my peers and participants. That being said, watching my participants come alive in a space that they create is changing the way I approach my relationships outside PBMR. Instead of thinking, “What can I do for you?”, I’m shifting toward: “How can I create space for you to flourish?”

Story by Thomas Weiss, arts coordinator at the Precious Blood Ministry of Reconciliation in Chicago. This article originally appeared in The New Wine Press.