It was a 13-hour drive from Rome, Italy, to Zurich, Switzerland. There was sweltering heat outside, but my husband, Chip, and I were enjoying our journey in an air-conditioned car, driving on smooth highways that run through tunnels cut directly into enormous mountains. Not quite the same experience of Mother Maria Anna Brunner, the foundress of the Sisters of the Precious Blood in 1834. But this was our journey — the Brunner Justice Pilgrimage.

Before our pilgrimage, I spent a lot of time reading many accounts from the Sisters’ archives of Mother Brunner and her more famous son, Father Francis de Sales Brunner, who was a powerful catalyst to Mother Brunner’s ministry and mission.

Mother Brunner was described as pious, and she was certainly committed to hearing God’s voice in her life. She had an incredibly strong work ethic, but she prioritized the rituals of her Catholic faith.

In 1776, at the age of 12, Maria Anna was sent to work as a house servant at the Brunner family home, Biebelberg Estate, not far from her childhood home in Mümliswil, Switzerland. (The Holy Blood Chapel was built to honor the Brunners in the 1970s near Mümliswil-Ramiswil.) When the mistress of the house died, Maria Anna was quickly elevated to running the entire household. It was there that she met and married her husband, John Baptist Brunner, and Biebelberg became her own home where she raised six children. Her husband died when their last child was only four, and her responsibilities were doubled. Providing a formal education for their children was among the priorities vying for Maria Anna’s time, attention and finances. Mother Brunner made many devout pilgrimages to the famous shrine of Our Lady, Maria im Stein, which is only a short distance from Mümliswil. She sent all three of her sons to the Benedictine Abbey of Maria Stein to study. Two of her sons became priests and one daughter became a nun.

Though her life was demanding, Maria Anna always recognized and cared for the poor in her midst. She could do nothing else, as her strong faith directed every part of her life. She taught her children to keep the Sabbath and to pray the Angelus three times a day, but she expected more from herself. Beyond going to Mass regularly and praying the rosary and the Stations of the Cross, Maria Anna was called to frequent pilgrimage. Working deep into the night if needed, Maria Anna wanted to ensure that those in her care wouldn’t be neglected in her absences.

In 1834, at the age of 68, Maria Anna took an important pilgrimage to the Benedictine monastery in Einsiedeln, where she prayed before the Black Madonna. Since all of her children were grown, she was seeking guidance as to where Jesus was calling her. Her oldest son, Father Bunner, invited her to assist him at his newly founded school at Castle Loewenberg. This seemed like a good fit, as Maria Anna could take care of the household duties and she could be close to the chapel so she could regularly visit the Blessed Sacrament. Soon she was well known in the nearby village, Sagogn, Switzerland, where she attended Mass at the Assumption of the Virgin Mary Catholic Church whenever there was no priest available to celebrate Mass at Loewenberg Castle. Again, Maria Anna was beloved, as she was compelled by faith to provide food and clothing to those in need.

Not long after moving into Castle Loewenberg, Mother Brunner asked her son if she could join him in traveling to Rome. Father Brunner was seeking support for missionary work, and Maria Anna was excited for this grand pilgrimage experience, her longest and most transformative. In Rome, she spent many hours on her knees, praying in St. Peter’s Basilica and other beautiful churches. In the church of San Nicola in Carcere she heard St. Gaspar del Bufalo, the founder of the Missionaries of the Precious Blood, talk about the redeeming love of Jesus. This passion inspired her. She felt God’s special calling in her life to return home and do whatever she could so that “not one drop of Precious Blood be shed in vain.”

“Urged by the redeeming love of Jesus the Christ and rooted in Eucharistic prayer, we Sisters of the Precious Blood proclaim God’s love by being a life-giving, reconciling presence in our fractured world.”

This is the foundational inspiration for the life and ministry of the Sisters. Catholic social justice teaching reflects this call to a life of unconditional love modeled by Jesus especially in regard to Jesus’ preferential option for the poor. The Sisters’ Assembly Directives of 2019 specifically include endeavoring to recognize and confront injustices in our world in light of the Paschal Mystery.

As peace, justice and ecology coordinator, I was excited to take this pilgrimage to many of the places in Switzerland and Italy where Maria Anna Brunner lived and loved, prayed and served, contemplating them through the lens of justice. So, the Brunner Justice Pilgrimage project was born. Soon, there will be a video series that takes its inspiration from these locations. It is a project connecting Mother Brunner’s spirituality and charism to how Sisters are responding to injustices today, listening to the “cry of the blood.”

Story and photos by Jen Morin-Williamson 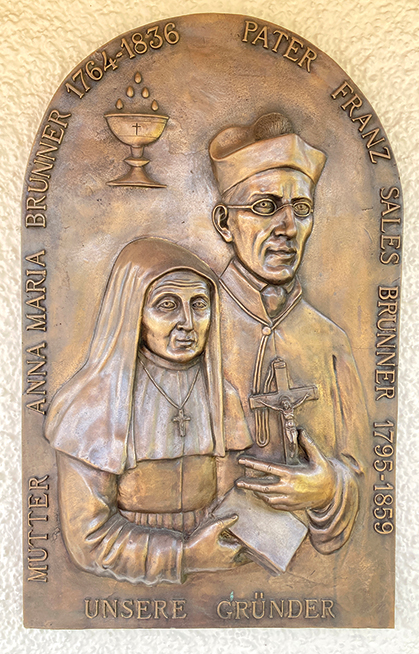 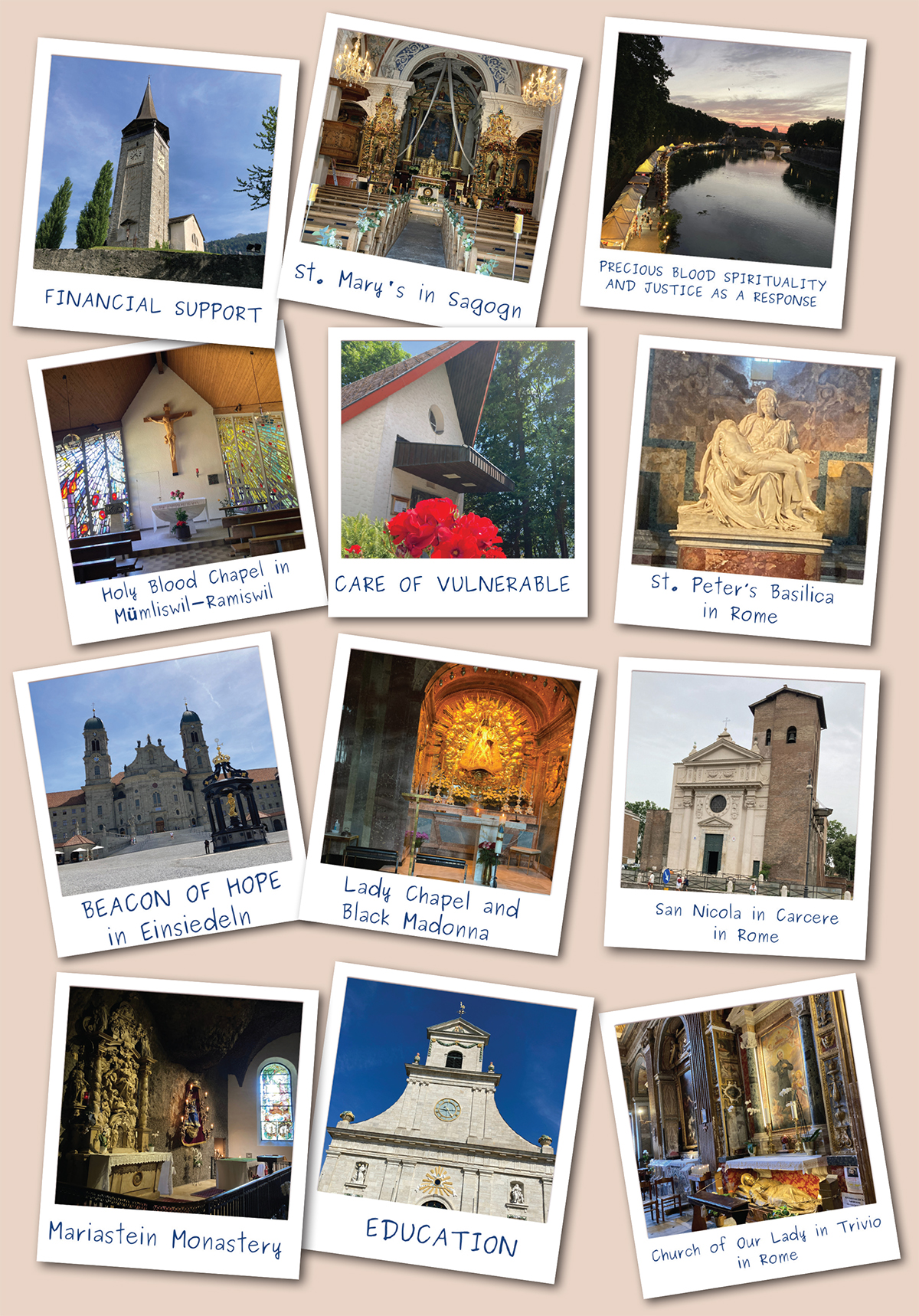 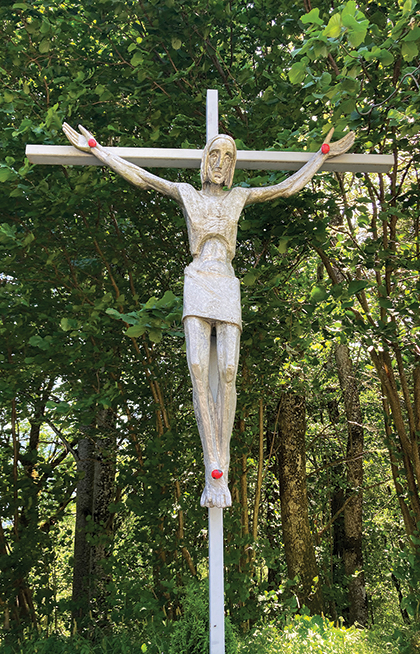 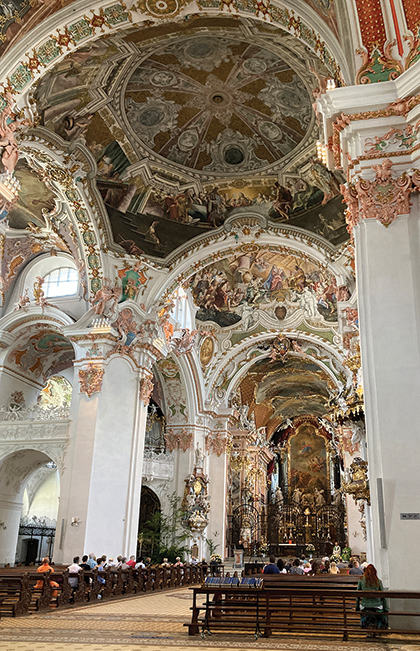 On the cover, Einsiedeln, the Benedictine abbey where the Black Madonna is located; top, the plaque of Maria Anna Brunner and Francis de Sales Brunner at Convent Schellenberg in Liechtenstein; second, a photo collage of places visited, some with social justice themes; third, Holy Blood Chapel outside crucifix; bottom, Einsiedeln Abbey.