All the Sisters were recognized at a Mass and banquet July 3 at Salem Heights, the Congregation’s central house in Dayton. In welcoming all those in attendance, celebrant Father Ken Pleiman, CPPS, called the jubilarians “great blessings and teachers for us — teaching about community life as a Sister of the Precious Blood and about how to serve God’s people.”

Sister Joyce Lehman, a former president of the Congregation, delivered a reflection on the day’s Scripture readings. “When we enter the Sisters of the Precious Blood, we enter into a place that becomes home for us. It is here where we are nurtured and nourished, comforted and challenged,” she said. “It is here where we are immersed in and soak up that spirit and power of the Precious Blood rooted in Eucharistic prayer, in adoration, in the prayers we pray in common, in the contemplative silence we foster and in the relationships we cultivate in community.

“Dominican Father Aelred Squire comments that: ‘like a drop of water in a quantity of wine, or a red-hot iron in the burning flame, we take on the character of that in which we are immersed.’ Our community, this specific gathering of committed women, becomes a Jerusalem, our place to call home, our place to return to in order to celebrate and be renewed in our mission.”

Originally from Cincinnati, Sister Mary Garascia grew up as a member of Xavier University Parish and attended Sts. Peter and Paul School and Regina High School. During her years of active ministry, she served as a high school teacher in Arizona and California; director of religious education in Colorado; and leader of parishes in Ohio, Michigan and California. She also served on the Congregation’s leadership team and taught theology and philosophy at St. Leo University in Florida and Loyola Marymount University in California.

Sister Carolyn Hoying grew up as a member of St. Joseph’s Catholic Church in the village of Egypt, Ohio, and graduated from Precious Blood High School — the Congregation’s former school also known as Fatima Hall — in Dayton. She served as an elementary school teacher in Dayton, Fort Recovery and Celina, Ohio, and Falls Church, Virginia. She was principal in Wapakoneta, Ohio, for four years and at St. John the Evangelist School in Loveland, Colorado, for 16 years. She was coordinator of vocation ministry for the Congregation for almost a decade, and since 2013, she has served at the Precious Blood Ministry of Reconciliation in Chicago, where she currently volunteers as an urban farmer.

A daughter of St. Margaret Mary parish in North College Hill near Cincinnati, Sister Nancy Kinross attended the parish school and Mother of Mercy High School. She served as a junior high and high school teacher in Cincinnati, Norwood and Wapakoneta, Ohio, as well as Falls Church, Virginia; she returned to St. Joseph School in Wapakoneta in 1978 and served as principal for four years. She was the Congregation’s novitiate formation director and served at the Maria Stein Spiritual Center in a variety of roles. She also served in leadership roles for Unda-USA, a professional organization for Catholic broadcasters; Groundwork for a Just World in Detroit; and Franciscan Haircuts from the Heart and Elder High School, both in Cincinnati. For the Congregation, Sister Nancy has served on the leadership team as vice president, secretary and Councilor.

Originally from Flint, Michigan, Sister Marie Kopin began her ministry as a teacher in Flint and Dayton, Ohio. Beginning in 1967, she served in numerous roles in the speech pathology field as a speech and hearing therapist, as well as in leadership positions. Ministry took her to Cleveland and Putnam County, Ohio, as well as Central Michigan University in Mount Pleasant, where she worked in speech pathology for 25 years until her retirement in 2000. She has also been active in music ministry in various capacities at numerous locations throughout her life. In retirement, Sister Marie has become a well-known figure in the field of mycology, the study of fungi.

A native of Bryant, Indiana, Sister Rosemary Laux (M. Columba) grew up as a member of the Church of The Most Holy Trinity and attended Holy Trinity parish school and Bryant High School. She served in dietary services in Denver, as well as in Canton, Cincinnati and Dayton, Ohio, and was the head sacristan at the Cathedral Basilica of St. Peter in Chains in Cincinnati. She also ministered at Maria Stein Shrine and Retreat House. 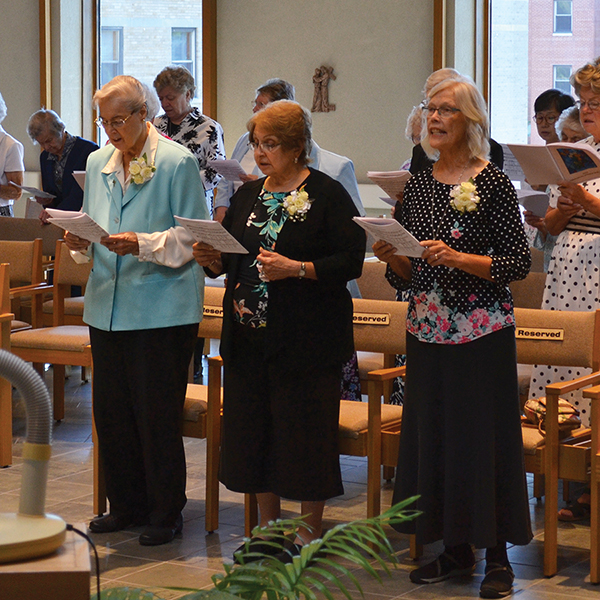 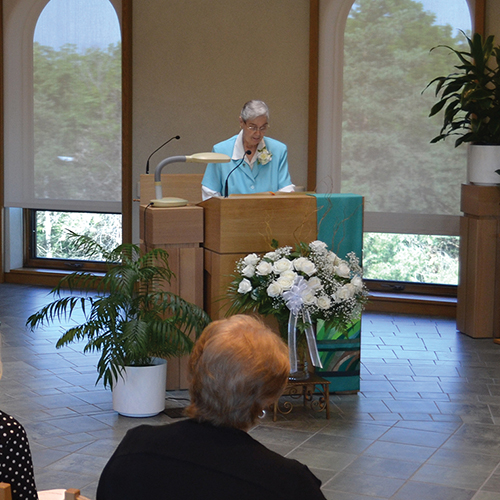 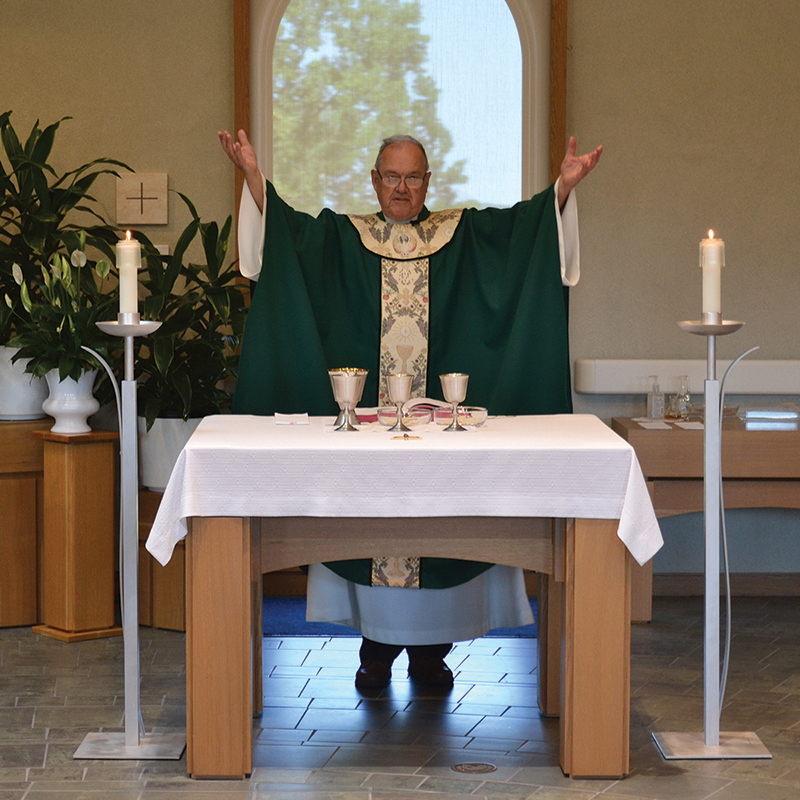 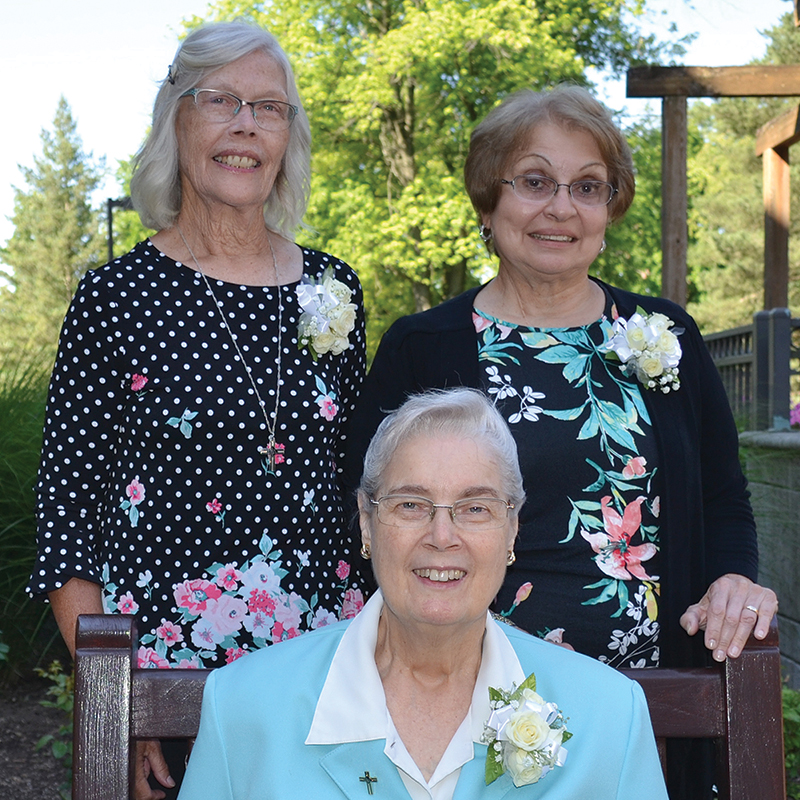 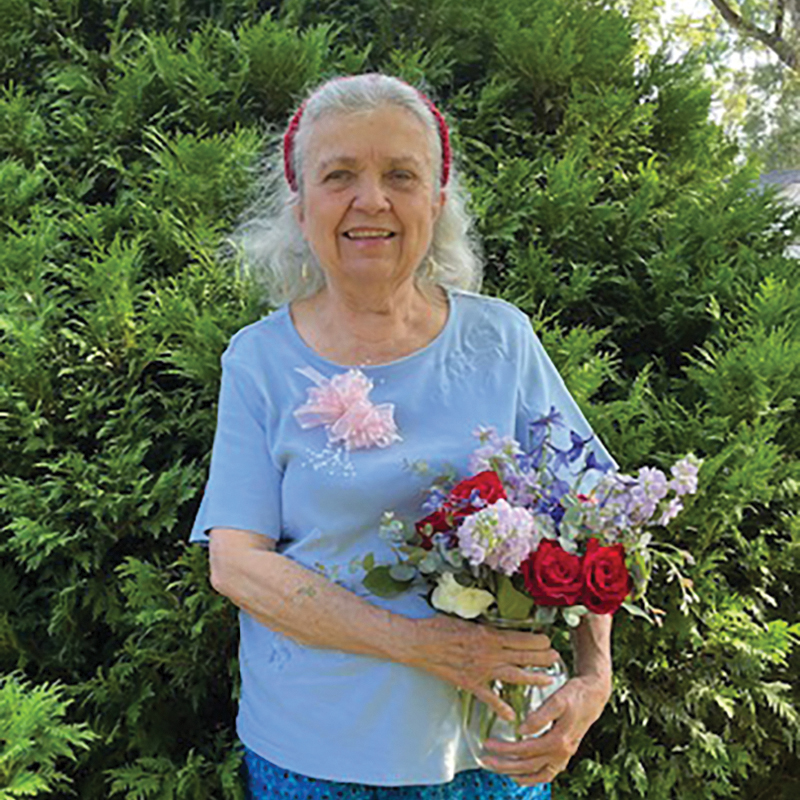 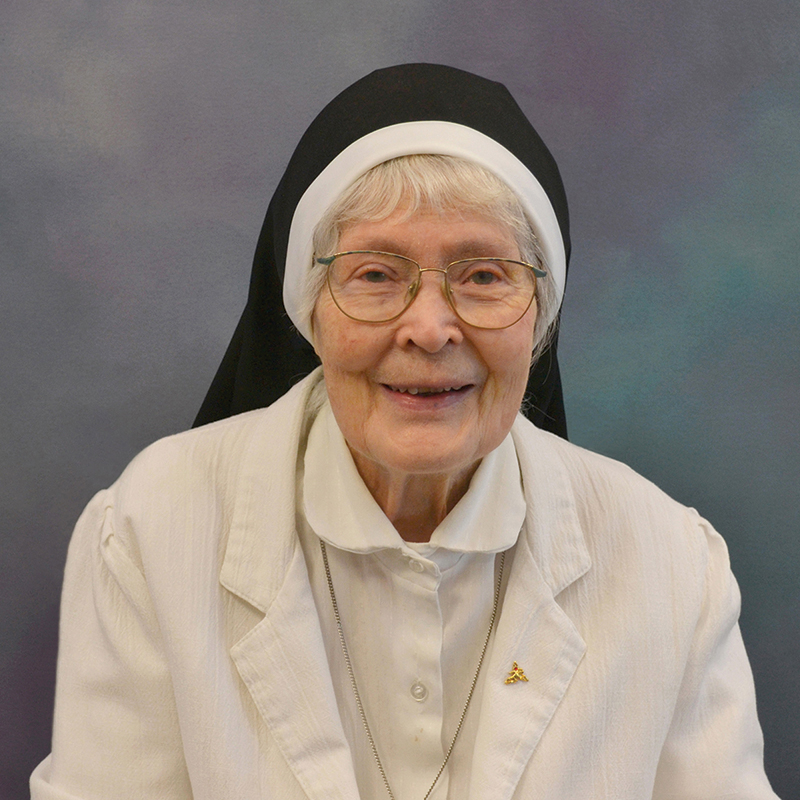