Just a week ago, a woman who had been incarcerated since she was 15, and had expected to die in prison, was released after 30 years of living within prison walls. As I saw her walking out into her freedom, I felt an explosion of grace as God met years of suffering with healing liberation and this promise of a new beginning.

Have you ever experienced an explosion of grace? Recently I read this expression and began to reflect on how many times I have been given this gift — unexpected grace that always overwhelms my heart and moves me closer to God and those around me.

I thought of how many times I have experienced that explosion of grace within the women that we accompany at the Precious Blood Ministry of Reconciliation! It’s impossible to count! Every day is full of explosions of grace in the joys and sorrows walking together on this journey of life and love.

Just today we had our monthly Mother’s Healing Circle and I heard again from the hearts of these women, broken and bruised, their sons’ and daughters’ blood poured out on our streets through violent acts, yet powerful witnesses of how God dwells amongst the most in need and explodes grace and beauty among us.

One mother, who has been traumatized in so many ways, shared how it was at her adult baptism that she felt an overwhelming abundance of grace. She said she found purpose in all her suffering, and a calm came about her that she had never experienced — all she could do was go home, cry and give thanks!

Another mother shared how after her son had died by suicide, she ran out into the middle of a busy street here in Chicago and was just crying out for help! She said that God answered her prayer that day by sending her angels and friends to lift her up, and a job that she’s had for years now — a job that she loves and gives her purpose. “I saw light in my darkness,” she said, “and I was amazed! I have been moving forward ever since that day of God’s attention!”

One of our grandmothers shared how, back when she hit rock bottom, she got down on her knees and didn’t stop praying until God heard her cry. Inside she felt this overwhelming movement and she knew then that she had been heard and was being healed. She has since been in recovery and is moving forward toward her goals!

A mother who lost her two sons — murdered in their own home — is struggling with living. Darkness surrounds her, but yesterday she texted me and said that while she was walking and crying, she spotted two beautiful yellow daffodils and suddenly felt a strong feeling of hope (an explosion of grace!). Then she asked if I could teach her to meditate and learn of God’s love for her.

Another mother comes to mind, who has overcome obstacle after obstacle since her youth, but keeps walking in faith and grace. Today, she has completed law school, passed her bar exam, and held tight to her business card that now reads: Attorney! She now offers advice and support to other women/mothers who are facing legal issues. She understands their fear of the unknown and accompanies them through this unjust system with the hope of a more restorative way of being.

When I think of an explosion of grace, I think of the mothers who have forgiven the persons who killed their sons or daughters and have actually asked that the perpetrator receive the lesser sentence!

I feel God’s grace alive in all the women who come to us who have “hit rock bottom,” who have lost everything yet are still holding on, still seeking strength, something to eat, detergent to wash the few clothes they still have, to care for their children and grandchildren as best they can. They come, they want to live, they want to heal, they want to know there is hope for them. Grace creates space for the unexpected, for these women to let go and let God’s grace show them what is possible for them and what is yet to come as they rise up!

Our mothers are crying out for the mothers and children in Ukraine! They know the pain of violence, of living in fear, of being evicted from their homes, of being without and yet they see that their pain is nothing compared to these women and children. They want to help — they pray — they cry in solidarity.

We often hear that “hurt people hurt people” but I see, as well, in our PBMR women that “healing people heal people.” Each of the women we accompany have experienced so much trauma from violence, racism, poverty and rejection, but as they find healing and hope, they are eager to pass on these gifts and graces to other women in the circle and beyond.

So, we at PBMR are blessed to help create those spaces where women, youth and neighborhood friends, myself included, can experience explosions of grace and spaces of hospitality, hope and healing — where there can be new ways of being together, new relationships, and new energy for building the beloved grace-impacted community!

May we all be aware of those explosions of grace and be amazed and give thanks!

Story by Sister Donna Liette
Originally published by the Missionaries of the Precious Blood in The New Wine Press. Used with permission. 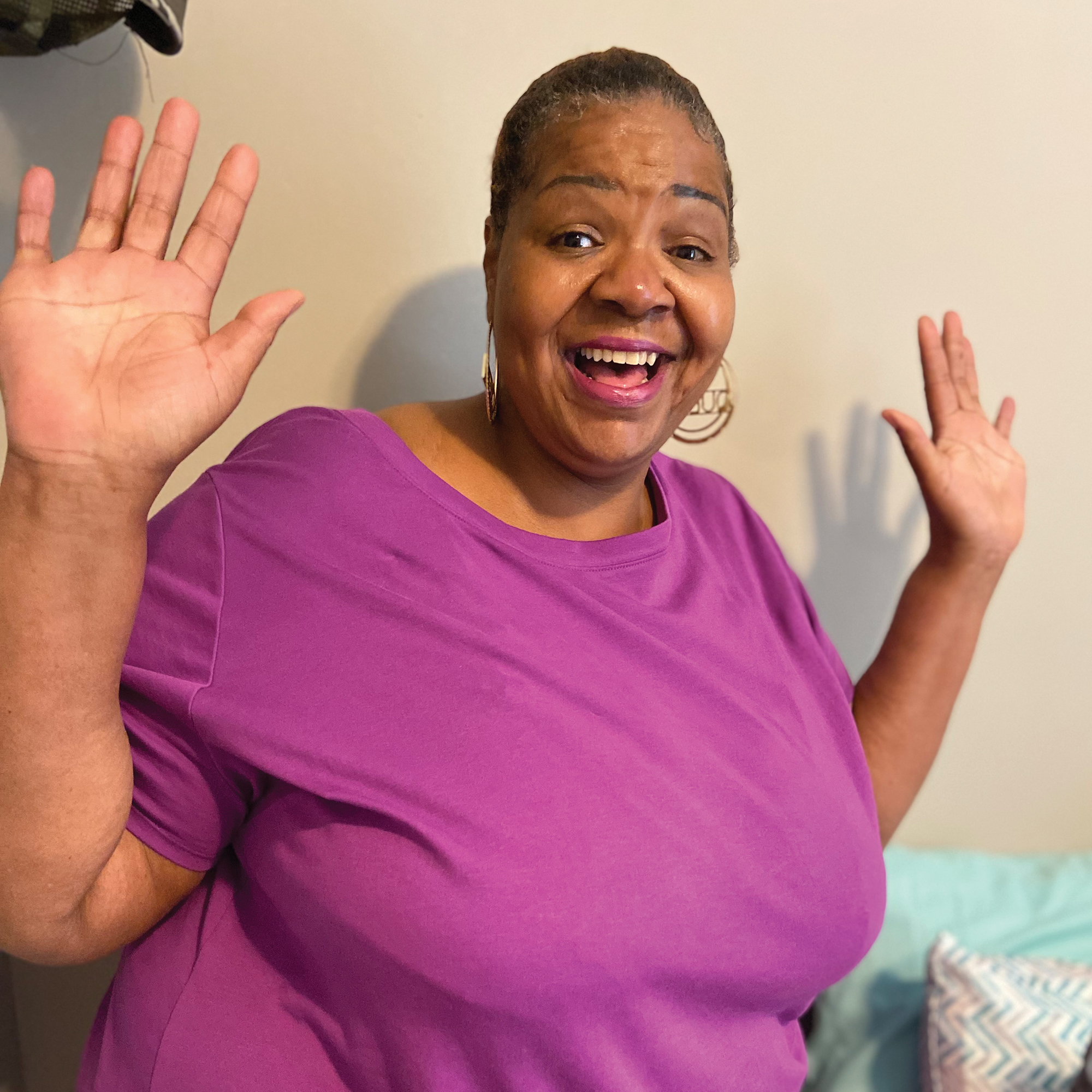 Top, One of the mothers in the Mother’s Healing Circle at PBMR; contributed photo. Bottom, Precious Blood Sister Donna Liette serves in ministry at the Precious Blood Ministry of Reconciliation as the Family Forward program coordinator. Recently she was interviewed on Chicago Catholic: Beyond the Headlines, hosted by Joyce Duriga, editor of Chicago Catholic newspaper. Sister Donna shared updates about monthly prayer vigils being held in Chicago for victims of homicide, and about the programs and services offered by PMBR. The half-hour interview is available on YouTube at https://youtu.be/2MAyeouZ8DE; YouTube screenshot photo.