As I sit here on retreat in the quiet of this simple hermitage in Fond du Lac, Wisconsin, watching deer pass my window, birds flirting from limb to limb singing in the rain, I pause and remember the many faces of our PBMR youth looking for hope, wanting to belong, to be welcomed, to be valued…I see the faces of the Mothers, the grandmothers who come to PBMR pouring out their pain at the shock of losing their son or daughter to homicide. Tears flow…I ask God, “Why?”

As the rain and tears begin to pour down heavily, I can hear the sobbing of Grandmother Judy who has lost three of her grandchildren to the horrors of gun violence. She along with 12 other women (ages 16-76) gathered in a circle several Saturdays ago in the backyard of our Mother Brunner Family Center. All 13 had lost a loved one to the violence of Chicago streets. There they sat shoulder to shoulder in the sun as one after another checked in telling the heartbreaking story of how they lost their son, their daughter, their brother, their uncle, their grandchild, and how they carry this indescribable pain every day since they received that dreaded call. All around the circle, there were eye glances saying, “I feel you…I love you.”

Alma (76) with her adult daughter by her side, spoke of Nate, whom she and her husband adopted when he was 2 months old; in between sobs she shares how she misses his singing, his humor, his love of family and his daily greeting, “Mama, what’s to eat?” How can she stand to think of him lying in the alley bleeding to death alone? Her pain is held sacred by the young 16-year-old across the circle from her who lost her uncle, nearly a brother being just a few years older than she — she weeps for the loss that she and her family feel day after day with Jammie not at the table. Cinthya tells of the loss of her brother 20 years ago. She weeps as she tells how he was her protector holding her hand as they walked to school, and how at 14 he was beaten to death with boards. She has been haunted for 20 years at how she could not save him or protect him from that dreadful night. She shares, “The pain just does not go away — there is always a void.”

As the talking piece circled around and these stories were told, all those gathered with their individual pain were brought together into this communal lamentation.

At the closing ritual the women were asked to stand and pick up a prepared “banner” from the center circle that held a large picture of their loved one, then one by one they spoke her or his name while the support community cried out, “MAMA”…followed by a remembering silence…13 banners, 13 names, 13 cries for MAMA…representing only a few of the many who are no longer with us, and the countless mothers, fathers, siblings who grieve the loss, the void, of the ones they love.

As the sobbing lessened, the women were invited into a communal prayer of thanksgiving, of praise, of petition, of lament…soon the cries to God became louder and louder, then like one voice they diminished.

And just when we thought the circle was complete, another amazing thing happened — a voice from the support community asked to speak. A man incarcerated for over 30 years had listened to and felt the pain of these women. He stood and told them how he was once a young boy on the streets and how their cries brought him to the realization that those whom he had harmed had Mothers and that 30 years ago they were the women sobbing because of HIS actions. He said, I cannot apologize to those Mothers, but I want to ask your forgiveness in the hope that it can extend to them somehow. He said, “You have moved me deeply and I am a man today because of you.”

I, too, am a better woman, a better Sister of the Precious Blood, because of these women and the community here at PBMR that open their wounds and let us touch their reality.

The rain lightens and the sun peeks out… 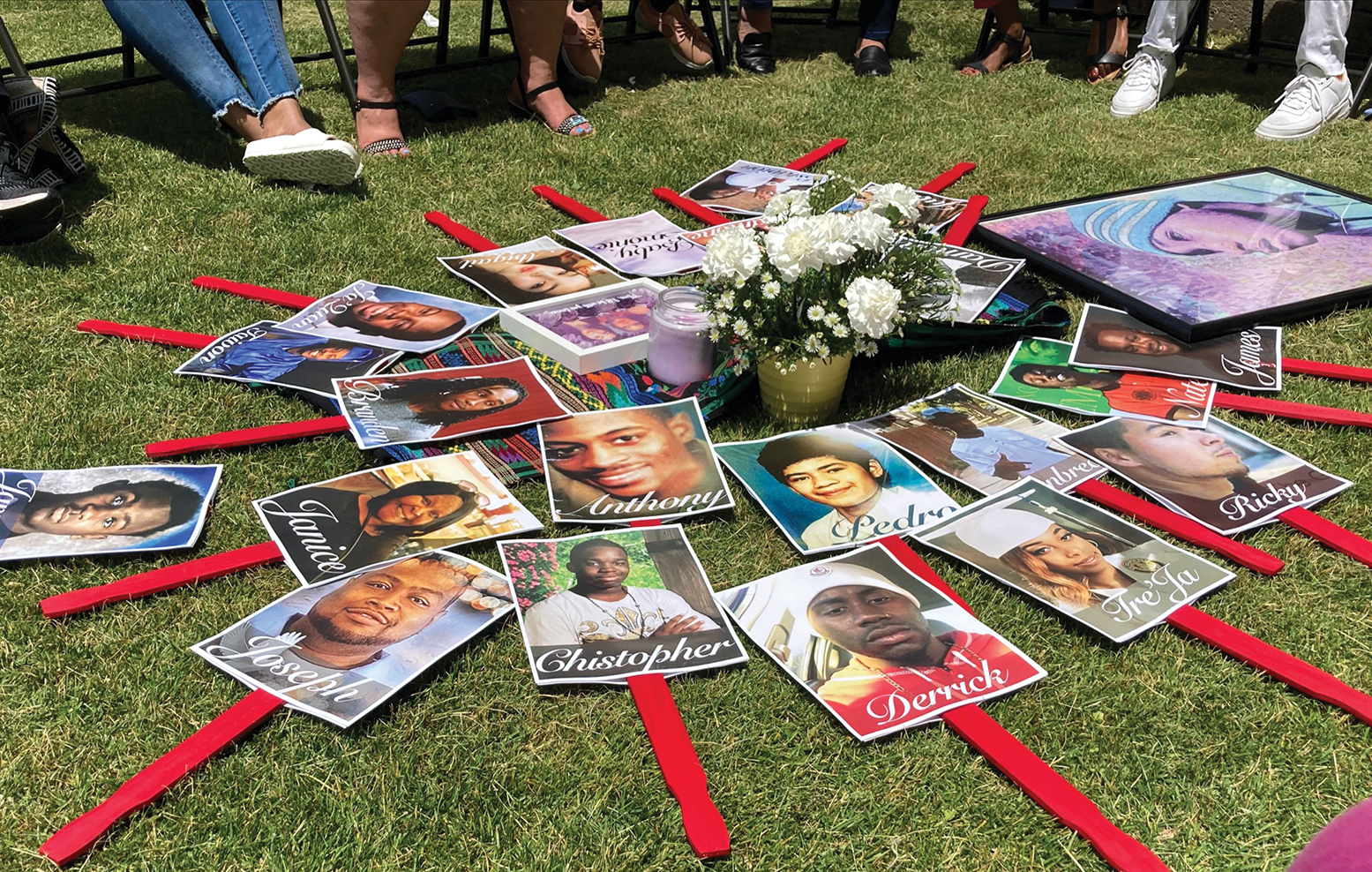 Top, victims’ families gather in a circle in the backyard of the Mother Brunner Family Center; bottom, photos of loved ones lost to violence. Contributed photos