Home News & Events Media Coverage 2022 Looking Back to Move Ahead

Looking Back to Move Ahead

I struggled to find the words to write this article. Or rather, multiple thoughts tumbled through my head making it difficult to sift and synthesize what to share within the parameters needed.

However, as the Akan people with their image of the Sankofa remind us, looking to the past is key to moving forward with intentionality, not only for the gems that we may find scattered in the history of our existence but also for the truth, so that we may honor that which has been and also not repeat mistakes, whether our own or those who came before us. The Sankofa is portrayed as a bird with its head completely looking backwards, demonstrating that knowing our history is essential to moving into the future with purpose.

After the brutal murders of our recent ancestors Breanna Taylor, Ahmaud Arbery and George Floyd, and the ensuing protests, vigils, webinars and panels, the word reconciliation was used with increasing frequency. The tempo picked up after the January 6th insurrection at the Capitol. The word unity also came into play. The current President has repeatedly made calls for unity, and what a blessing it would be indeed if the next four years could reverse the last four years and also heal the past.

However, how far back do we need to look? Many have argued that current generations should not be held responsible for the sins that occurred before them. The fact that we have reaped the benefits or continue to suffer the pains of our ancestors debunks that idea. How many religious congregations enjoy financial stability that was established in slavery? How many more rejected women and men of color from their ranks so as to not rankle their benefactors and collaborators? How many continue to find ways to oppress their minority members whose voices are drowned by the white majority?

What stories do we tell ourselves of why things are the way they are? What aspects of history have we glossed over or omitted in order to minimize our complicity in the terrible injustices that have happened? Reconciliation demands a revisiting of history, and the narratives we share establish what the truth was and is. These stories go back to when the first nonnative people set foot on this sacred earth and what has ensued to this moment. We also need to address the historical narratives of our own families, communities, congregations, and organizations—our own personal histories.

How many times have we shied away from confronting a prejudiced remark or comment by our family and/ or community members, preferring to ‘keep the peace’ so as to not estrange the person in question? It might seem reasonable enough but consider the fear with which BIPOC people navigate walking in this land each day. Not even their homes are safe, as we saw with Breonna Taylor, nor a routine jog, as we saw with Ahmaud Arbery. Many People of Color live with the constant fear of wondering whether this might be their last day alive or free in this land. The people we saw storm the Capitol did not get radicalized overnight, and they, too, likely had friends and families who chose to mind their business or keep the peace over the years as they peddled in racist remarks, conspiracy theories and alternative facts.

I do not want to diminish the call or the desire to act as builders of bridges and reconciliation ministers, the call to stand in the gap, because that is part of our very fiat as religious. For years, we have responded to the needs of society as they arose, from educating immigrant children and establishing healthcare systems that have grown into huge institutions, to responding to various catastrophes like Hurricane Katrina and the tsunami in Asia. Wherever the spirit has led or called, we have faithfully responded. The spirit is calling now, too, because we are alive and present, called for such a time at this.

I have talked many times with other younger religious sister friends about how hard it is to have conversations and workshops on racism in religious life. My response has always echoed something along the lines of, “It is very hard to tell life-long dogooders that they are also complicit in racism and white supremacy.” This is not in an attempt to discount the inordinate amount of social justice reform and progress that religious communities have done, not just in this country but around the world. However, if we are going to stand in the gap when it comes to this issue of racism, we first need to reconcile with God and self.

We must begin by attending to vertical reconciliation. Reconciliation is only possible in and through God because the extent of the transgressions throughout the course of history are so vast. Only God can help us imagine a world where every victim receives the care needed to heal and not transfer their pain in turn. We need to acknowledge the multitude of personal transgressions, some of which we might not even consider consequential, that have led to this moment. In the quiet moments of our lives, during meditation and retreats, let us present our bare selves to our God who infinitely loves us, asking that we be healed of prejudice, that we may love all of humanity equally, that we may be courageous enough to name our shadows and those of our institutions. After which we can then attend to horizontal reconciliation, repairing the harm that racism has caused in our relationships with others, such as denying us the opportunity to celebrate our diversity.

How we have gone through life with blinders, when half of society continues to be oppressed by policies and structures enacted by human beings. How we have missed opportunities to be allies for Black and Brown folks time and time again. As people of faith and members of religious communities, how have we justified to ourselves the absence of people of color from our ranks over the years, whether it be in our pews or in our congregations? If reconciliation is to succeed, we need to fully grasp the extent of the damage our silence and complicity have contributed. That will probably have to start with deeply listening to our own victims.

In the work of reconciliation, four pillars hold true: mercy, peace, truth and justice. We rush to mercy and peace, even demanding them of victims, because who really likes conflict or being confronted by the ugliness of human nature? Many of us grew knowing that we shouldn’t air our dirty linen in public, after which we became members of an institution, our Church and religious congregations, that promotes this culture of silence in a bid to avoid scandal. Many times, this has been at the expense of the victims.

The legal system also comes into play in further reinforcing this because an admission of liability could open oneself to all kinds of recriminations. The little justifications we make each and every day as to why racism exists become colossal overtime, resulting in scenarios where there are multiple versions of the truth or a complete erasure of it. Our denial of the truth goes hand in hand with placing the blame on others in an attempt to avoid our own complicity. Creating spaces for truth telling requires that we cultivate a stance of openness to what we shall hear from both the victim and then also the perpetrator which may be a confirmation of what we already know, a complete refutation of it or a mixture of both. It means as victims, or allies of victims, we need to put our anger aside and truly listen to the other.

Justice then follows and it is not the punitive legalistic system which in itself is a racist system. Justice from a Christian perspective is much broader, looking not only at issues codified by law as legally wrong but more broadly at what is morally wrong. It is concerned with the ‘why’ question. Why has our nation neglected and oppressed Black and Brown people and inflicted unbearable punishment on them for acts done as a form of human survival? Why aren’t the extremely wealthy and those that have kept creating policies and laws that sideline certain races also not guilty? How far are you willing to go to ensure justice for your own victims as individuals, institutions and congregations?

Mercy and eventually peace follow when the first two pillars are attended to with intentionality and care. From my perspective, it is difficult to be merciful towards my oppressors when they fail to be vulnerable, when they refuse to own their sin, when they make excuses for their actions, when they continue to treat me as less than and thus deserving of less than what they have, when their apology does not go hand in hand with concrete actions to repair the harm that has been done.

We are reminded in Scripture to be faithful in little things so that we can be trusted with more. To address the horrors of racism in this country, we need to start local, looking back like the Sankofa confronting our individual and communal transgressions with vulnerability and honesty. Then, as sisters and brothers in Christ, we must stand in the gap for an aching and wounded nation. 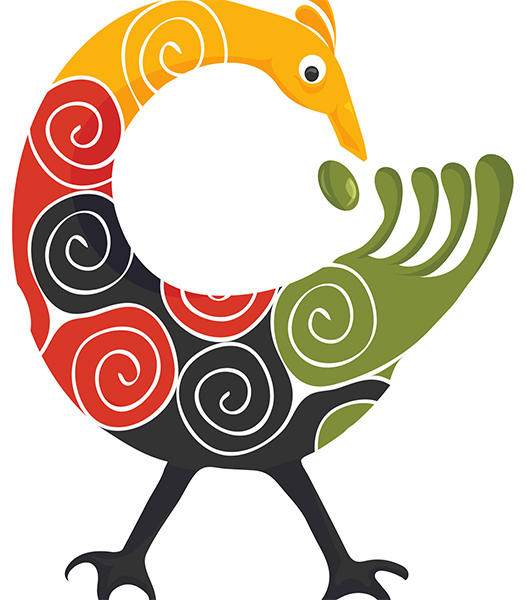 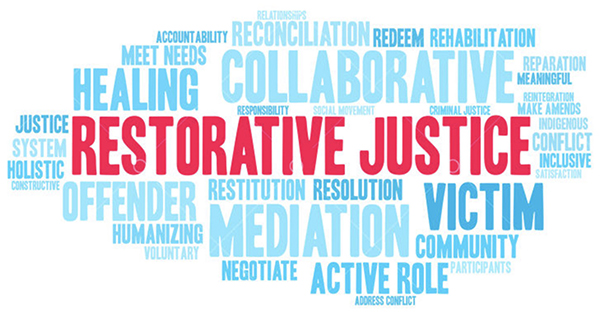 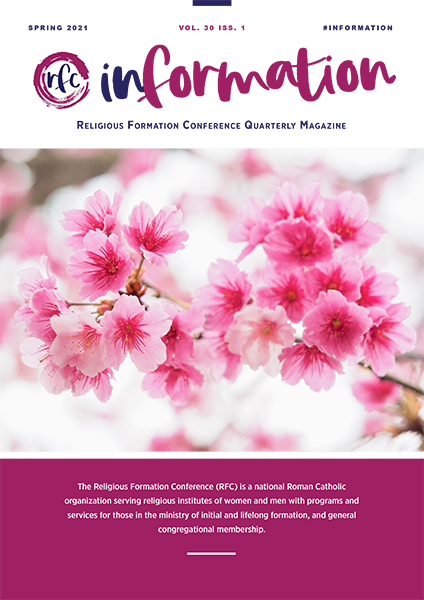 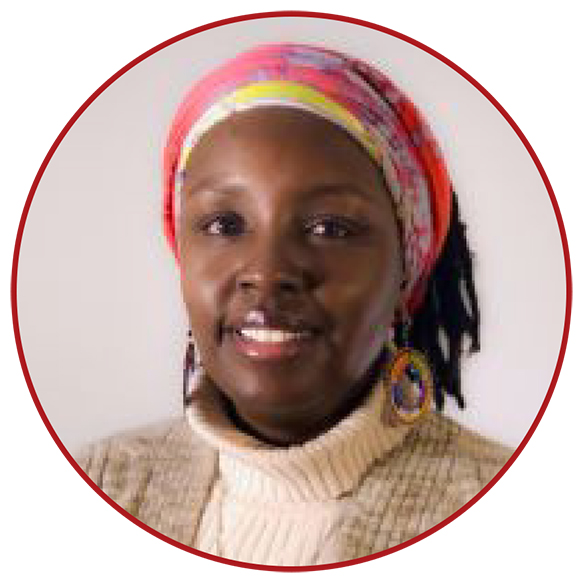 Top, Sankofa is an African word from the Akan tribe in Ghana. The literal translation of the word and the symbol is “it is not taboo to fetch what is at risk of being left behind.” What stories do we tell ourselves of why things are the way they are? What aspects of history have we glossed over or omitted in order to minimize our complicity in the terrible injustices that have happened? Second, in the work of reconciliation, four pillars hold true: mercy, peace, truth and justice. Third, Spring 2021 InFormation. Bottom, Sr. Mumbi Kigutha, a member of the Sisters of the Precious Blood (Ohio), was born and raised in Kenya. She has worked with diverse vulnerable populations, including assignments with various U.N. agencies. Currently, she ministers in Chicago as a part-time international consultant for Jesuit Refugee Service under the reconciliation and social cohesion department.
In addition to a Master of Business Administration in marketing, Sister Mumbi has a graduate degree in justice ministry and a certificate in pastoral ministry from Catholic Theological Union, a practitioner diploma in executive coaching, and training in the circle process as a tool for dialogue.
A prolific writer, she is a regular contributor to the Horizons column of the Global Sisters Report and was recently appointed organizing secretary of the Pan-African Catholic Theology and Pastoral Network.
This article originally appeared in the Spring 2021 vol. 30 iss. 1 of InFormation, The Religious Formation Conference quarterly magazine.