The Sisters of the Precious Blood re-elected Sister Joyce Lehman as president and returned three councilors to new 4-year terms during the congregation’s 2015 General Assembly in Dayton.

Sister Patricia, a Cincinnati native, has been principal of St. Christopher School in Vandalia, Ohio, since 1993 and has ministered in education for more than 30 years. This will be her first time serving on council.

A native of Ottoville, Ohio, Sister Joyce previously ministered at the Diocese of Toledo as director of pastoral planning and secretariat leader for pastoral leadership. Sister Nancy, a Cincinnati native, has been a teacher and administrator, Executive Director of UNDA-USA, and has worked with non-profit programs providing services to under-served residents of the greater Cincinnati area. Sister Linda, who also serves as the congregation’s treasurer, is a former teacher and administrator. She was born in Sidney, Ohio. Sister Ceil, who grew up in Cincinnati, has been active in pastoral ministry, education, administration, and inter-faith and justice and peace endeavors.

The new leadership team will be installed on August 2 and serve until August 2019.

During their June 24-July 1 General Assembly meeting held at the University of Dayton’s Virginia Kettering Hall Conference Center, Precious Blood Sisters also set directions to guide them in the next four years. These include initiatives related to promoting their charism of spirituality of the Precious Blood of Jesus, solidarity with the marginalized and fostering reconciliation, and acting responsibly related to our planet’s resources. 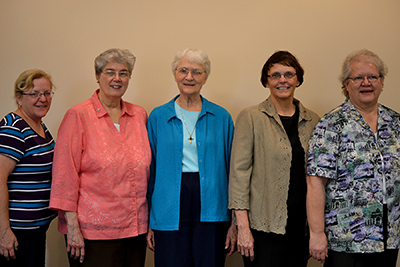