The Sisters of the Precious Blood have completed their 2019 Assembly, electing a new leadership team and setting directives for the future of the Congregation. Sister Edna Hess was elected president and Sister Patty Kremer vice president. The new Councilors are Sisters Ann Clark, Marla Gipson and Margo Young.

“Our assembly was a graced moment of gathering, discerning and setting directions for being in mission for the next four years,” said outgoing president Sister Joyce Lehman. “The five Sisters who were elected to lead us in fulfilling the Assembly directives are generous in letting go of their present ministries to embrace this new ministry of Congregational leadership.”

An installation Mass and celebration will be held for the new leadership team in August at Salem Heights, the community’s central house in Dayton. The team will serve a term of four years.

The Sisters of the Precious Blood are an apostolic Catholic women’s religious congregation devoted to Eucharistic prayer and motivated by the redeeming love of Jesus. Founded in Switzerland in 1834 by Maria Anna Brunner, Precious Blood Sisters minister where the needs of the time call them. They currently serve in the United States, Chile and Guatemala, proclaiming God’s love by being a life-giving, reconciling presence in our fractured world. 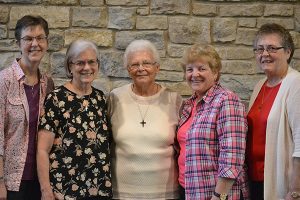