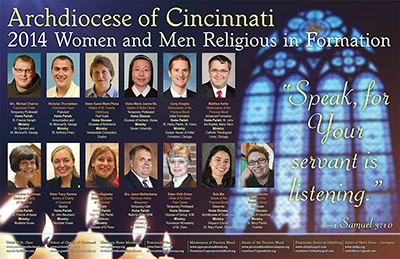 A new effort to highlight religious life in the Archdiocese of Cincinnati is colorful and visual.

The Sisters of the Precious Blood have collaborated with seven other religious communities to create a full-color poster featuring men and women in religious formation. The poster features photos of 13 men and women who are either from the Cincinnati Archdiocese or are working in the archdiocese. Under each photo is the person’s name, religious community, stage in formation, home parish or diocese and location of ministry. A quote from 1 Samuel and contact information for the eight participating communities are also included on the poster.

The poster is similar to one produced by the Athenaeum of Ohio featuring photos of seminarians who are in discernment at St. Mary Seminary in Cincinnati. The religious formation poster is the first one produced in the archdiocese in recent memory. Plans are to update the poster yearly.

The poster is being distributed to parishes, Catholic schools, Newman centers and other Catholic institutions in the Cincinnati archdiocese.

It is also on display in offices of the Chancery and in Archbishop Dennis M. Schnurr’s office. Archbishop Schnurr commented that the poster helps him illustrate the level of commitment to religious life in the archdiocese.

On social media, the poster has been promoted on the archdiocesan website and Facebook. Other communities have featured the poster on their social media outlets as well.