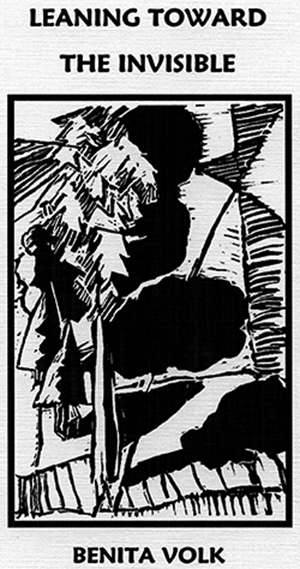 Precious Blood Sister Benita Volk, who freely admits that she loves words and has been writing poetry for years, won first place in the 2012 Chapbook Contest sponsored by the Columbine Poets of Colorado. The contest is a statewide competition and winners were announced earlier this year.

Her book of poetry, Leaning Toward the Invisible, was published in September as part of the winning entry. The book is being sold at poetry readings in the Denver area and copies are available through the Sisters of the Precious Blood.

The book contains 21 poems, most of them using nature to reveal deeper thought. One of the poems, for example, describes a flock of geese flying into the darkening horizon leaving a nighttime dream of longing for an unseen place.

“I’ve always been a lover of nature,” said Sister Benita, who grew up on a farm in North Dakota and often hikes in the mountains of Colorado. “I grew up in the midst of it. It’s always been an important thing to me.”

In her poems, Sister Benita writes about animals, the sky, plains and the ocean. She uses her experience in nature to develop her poetry.

“Nature is very sensory,” she said. “There’s always something to see and hear and feel and touch. I believe that the more concrete poetry is the more accessible it is. To start with something in the natural world and move into something that’s less concrete helps tell the human experience.”

In entering the contest, Sister Benita chose some of her strongest poems and sent them in. The book has been well-received in the area.

“In a world of much noise, Benita Volk’s poems in Leaning Toward the Invisible are quietly passionate,” poet Veronica Patterson wrote in a review of the book. “In a world of heavy flavors, these poems cleanse the palate, though they wake the tongue. And in a world of too much or too little, these poems embody their insights precisely as they probe and sing.”

Sister Benita has an “extraordinary gift,” poet Joseph Hutchison wrote in another review.

“Benita Volk has an extraordinary gift for metaphor and an ear for complex verbal music,” he wrote. “Poem after poem in Leaning Toward the Invisible follows Robert Frost’s dictum, beginning in surprise and ending in delight. In a period when too many poets seem content with suggestive scraps, Volk provides us with wholly realized poems, and there are plenty of readers who will celebrate the many pleasures her words have to offer.”

A retired English teacher, Sister Benita said she enjoys writing poetry because the genre is short and intense. She also appreciates how poetry enables people to connect with themselves.

“I enjoy that (writing) takes me out of myself, at the same time I feel that I’m at most who I am,” she said. “I’ve always felt that putting words together in just the right way has a lot of power and creates an experience that can connect people with their inner life.”

Leaning Toward the Invisible is available for $10 ($5 for Precious Blood Sisters). To order a copy send checks or money to Sister Linda Pleiman; 4000 Denlinger Road; Dayton, Ohio 45426.