Nuns on the bus roll through Dayton

DAYTON – The Nuns on the Bus Ohio tour stopped at the University of Dayton Oct. 11 and the Sisters were greeted by more than 100 cheering spectators who shouted in support of their message of care for the poor, social justice, a fair national budget and protection of the environment.

About a half-dozen Sisters, including Precious Blood Sister Mary E. Wendeln, were part of the Oct. 10-15 1,000 mile tour of Ohio. The tour launched in Cincinnati and included stops in Dayton, Lima, Toledo, Cleveland, Summit County and Marietta. With less than a month before the election, the Sisters urged people to consider the marginalized and fiscal responsibility when they vote. The trek was modeled after a similar tour of the Midwest last summer.

During the rally, Sister Mary shared stories of the people the nuns met in Cincinnati including those who struggle without health insurance and undocumented immigrants who live in fear of deportation. She encouraged the dozens of college students in the audience to vote. “We’re here to say that you are the future,” she said.

Sister of Mercy Fran Repka told of a middle-class family of five in which the father lost his job. He found some work, but was unable to provide for his family and ended up becoming suicidal. Still, we have the power to change these outcomes, she said.

“We’re all in this together,” she continued. “We can make any kind of country we want.”

Throughout the tour, Sisters met with the poor and marginalized, visited social service agencies and invited the presidential candidates to meet with them in Ohio. The rally at the University of Dayton was covered by national media outlets and National Public Radio mentioned the Ohio tour in a story Oct. 15.

“The fact that you are here makes us hopeful,” said Dominican Sister of Hope Monica McGloin. “Thank you for caring.” 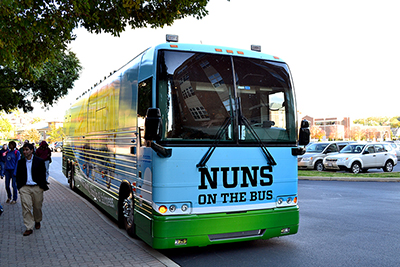 The Nuns on the Bus Ohio tour pulls up to the University of Dayton on Oct. 11 for a rally.